Selecting five Wallabies in a Rugby Championship team of the tournament (see below) tells its own story about the strides the Wallabies have made in recent months.

It’s not quite the magical formula of five or six world-class players needed to win a Rugby World Cup, but it is certainly a step in the right direction for Dave Rennie’s side.

The players are Taniela Tupou, Michael Hooper, Quade Cooper, Samu Kerevi (albeit at No.13 to accommodate the All Blacks’ David Havili), and Andrew Kellaway. The Wallabies are getting better: that’s the message with one game left on Australia soil this year.

Picking these hypothetical teams is always a highly subjective matter, particularly when the players have all played a different number of minutes, and against different opposition. For example, Beauden Barrett would be a worthy selection at No.10, given that the All Blacks have clearly been the benchmark team and dished out two heavy defeats to the Wallabies.

But in the context of how individuals have improved the overall level of their respective teams, no one has had a greater impact than Cooper and Kerevi (Argentina’s tough, consistent halfback Gonzalo Bertranou and Springboks’ replacement hooker Malcolm Marx also deserve recognition for how they lift those sides).

The Wallabies’ improvements have flowed from the inclusion of their No.10-No.12 pairing, and while there is an increasing number of interchangeable parts in the Wallabies squad the Japan-based duo stand apart. 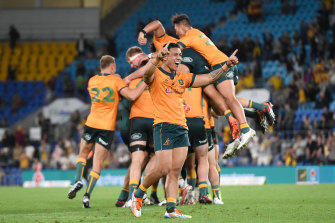 Put simply, the Wallabies are playing their best rugby since the 2015 Rugby World Cup. In terms of consistency, nothing has come close in the years following 2015 to what they have produced over the past three Tests.

You could argue the victory against the All Blacks in Brisbane last year was a bigger scalp, but that Wallabies side was still on the rollercoaster, up and down. Without tempting fate, Wallabies fans probably already know what they are going to get against Argentina on Saturday – ball movement, hard carries, pace, aggression over the ball. Doing the same difficult things over and over is how you win respect.

Yet, the spine of a Rugby World Cup-winning team is far from in place, because there are still gaps at fullback, the second row, and hooker. Even if Folau Fainga’as form uptick continues, there need to be another two hookers at that level to rival teams such as the All Blacks.

The inclusion of France-based Tolu Latu on the spring tour could partially help remedy that issue, and similarly the situation in the second row could be assisted by the returns of Rory Arnold and Will Skelton.

Rugby Championship team of the tournament

As realistic as expectations must be regarding their fitness immediately meeting the Wallabies’ exacting standards, it is hard not to think that the trio can give the Wallabies their next nudge forward.

Skelton hasn’t been a flash in the pan in the northern hemisphere, winning outsized plaudits on account of his huge frame: he’s been grinding away at the pointy end of European rugby for a couple of years, playing alongside some elite talent first at Saracens and then La Rochelle. The prospect of the Wallabies sending the big man at tiring defences for the last 30 minutes of Tests in November is a welcome one.

There has to be a degree of circumspection when talking about the Wallabies. It is not so long ago that they were being beaten handily by the All Blacks, whose own improvements this year have probably exceeded the Wallabies’ progress.

In the short term, Japan are planning an ambush in Oita (although the Herald and The Age understands the crowd capacity will be capped at 50 per cent, or about 20,000, depriving the home side of some emotional energy).

And, once the international season finishes in late November, the Wallabies will return to their Super Rugby franchises, where bad habits could once again creep in.

Nonetheless, they are starting to look like a good Test team, with a clear plan to get better still.

From the Archives, 1997: Carey a beacon in Roos victory over Geelong