The AFL Players Association would welcome fresh discussions about the introduction of a mid-season trade period, declaring the competition must continue to evolve.

The AFL reintroduced the mid-season draft two years ago, the latest instalment to be held next week, but the trading of players remains restricted to a short window once the season is finished in October. 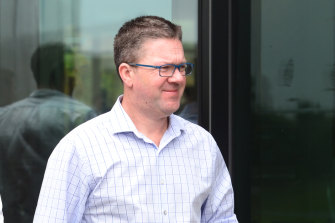 There are several issues to address before a secondary trade period could work but the premise is that it would give players struggling for a senior game at their current club the chance to seek regular selection elsewhere.

In 2019, AFL football operations manager Steve Hocking floated the introduction of a mid-season trade period as early as last year, declaring the league was “keen on it,” but that was halted because of the fallout from COVID-19.

But AFL Players Association chief executive Paul Marsh said on Wednesday fresh discussions with the AFL would now be welcome, though he reiterated that the mid-season draft was still in its infancy.

“[But] certainly, from our perspective, it [mid-season trade period] is not something that we are ruling out.

“There are challenges associated with this from a player welfare perspective. There are logistical issues, even some financial issues for players. So, it’s something that we need to work through.

“Some of the coaches have expressed views historically that setting up your list for all eventualities is part of the art of list management and wouldn’t necessarily support this.

“But I think we need to continue to evolve as an industry. It’s certainly not something that we would rule out and we welcome discussion around it.”

One issue would be the use of draft selections and whether they would be tied to a team’s current position on the ladder and whether selections accrued in the previous end-of-year trade period could be used. Another issue is whether an unsuspecting player could find himself squeezed off a list if his club was keen on a particular opposition player.

Clubs could also look to trade players coming off contract who do not intend to re-sign.

One player agent said there was merit in a mid-season trade period but questioned why trading could not be done throughout the season.

Marsh, who is preparing to lead fresh discussions with the AFL over a new collective bargaining agreement, said a mid-season trade period remained a polarising issue for players but it could help some. Collingwood captain Scott Pendlebury has previously been an advocate.

“There are certain players that would look at it that way. They’re typically the players who aren’t getting a game with the club they are with but, on the flipside, there are players that don’t believe in this,” Marsh said.

“So, this is a polarising one amongst the players and I think the broader industry. We haven’t really had a significant conversation with the AFL on this issue over the last couple of years.

“The industry has been very distracted, for obvious reasons, around COVID. It’s something that I am sure will come again. I guess my message is we are open minded to it but we don’t have a strong position either way yet.”