Waikato Chiefs rising star Sean Wainui has died at the age of 25 after a car crash on Monday.

Police attended the accident in Omanawa, near Tauranga on New Zealand’s north island, shortly before 6am AEDT, after a vehicle crashed into a tree. 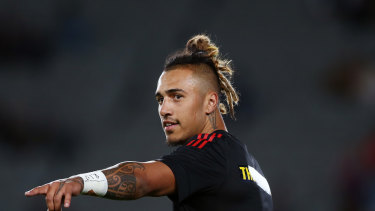 Wainui was confirmed as the sole victim by Bay of Plenty police.

“We are heartbroken right now,” the All Blacks tweeted.

“Sean, you were an inspiration, and will never be forgotten. We extend all of our strength and aroha to your friends and whānau.”

On the field, Australian rugby fans will remember Wainui for his five try outing against the Waratahs at Brookvale Oval earlier this year.

Wainui played 53 games for Taranaki before moving to Bay of Plenty this year.

The 25-year-old also played 44 games for the Chiefs, nine for the Crusaders and first represented New Zealand Māori in 2015.

The All Blacks, who are in the USA, expressed their sorrow on social media.

The post read: “We are heartbroken right now. Sean, you were an inspiration and will never be forgotten. We extend all of our strength and aroha to your friends and whānau. Kia au tō moe.”

“My thoughts are with Sean Wainuis’ family. Especially his wife & young child. Although I didn’t play alongside him, I could always feel his mana coming up against him as his opposition,” he tweeted.

Wainui’s death was confirmed by NZ Rugby on Monday afternoon.

Chief executive Mark Robinson extended all of rugby’s condolences to Wainui’s wife Paige, their children Kawariki and Arahia, and their wider whānau “on what is a dark day for rugby”.

“Our thoughts are with Sean and his whānau, particularly Paige, Kawariki and Arahia, and we offer them our full support at what is the most difficult of times. We know Sean’s passing will be felt deeply by everyone involved in rugby, particularly his Bay of Plenty and Chiefs teammates, and we share their sorrow and their shock.” 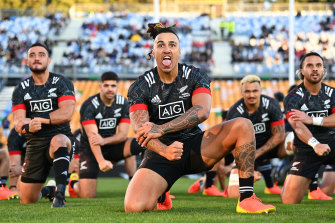 Wainui performs the haka during the Test match between the Maori All Blacks and Manu Samoa in July.Credit:Getty

Wainui is from the small settlement of Whatatutu near Gisborne and has ties to Ngāi Tuhoe, Te Āitanga a Māhaki, Ngā Ariki Kaiputahi and Ngāti Porou.

He spent most of his childhood in Auckland and attended Takapuna Grammar School.

Wainui first rose to prominence when playing for New Zealand Under-20 who won the World Rugby Junior World Championship in Italy in 2015.

Later that year he joined the Māori All Blacks for the first time.

Wainui made his Chiefs debut in 2018 against the Crusaders, and played 53 matches for Taranaki before joining Bay of Plenty this year for the NPC.