Home » Rugby » ‘No disrespect’: No RTS or Barrett as Blues roll out ‘B’ team for Tahs

Blues coach Leon McDonald says the decision to rest Beauden Barrett, Roger Tuivasa-Sheck and the majority of his starting team for Saturday’s clash against NSW is not intended as a slight to the Waratahs.

With the Blues holding an unassailable lead at the top of the Super Rugby ladder with one round remaining, McDonald named a “B” team on Thursday to travel to Sydney and take on the Waratahs at Leichhardt Oval. 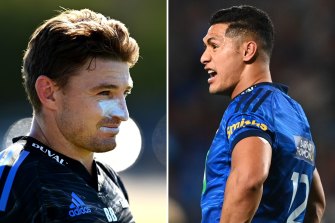 Roger Tuivasa-Sheck and Beauden Barrett will both miss the Waratahs clash.Credit:Getty

Eight of the full-strength Blues team that downed the Brumbies in Canberra have been replaced with a rookie-filled team, due to injuries and resting. In the back line, only halfback Sam Nock has more than 17 Super Rugby caps and 20-year-old Jock McKenzie will make his run-on debut at five-eighth.

It is the second time this season a major Kiwi team has elected to rest players for a clash with the Waratahs at Leichhardt Oval, after the Crusaders left Richie Mo’unga and three other All Blacks in the stands.

The Waratahs responded to that decision by beating the Crusaders and despite Tane Edmed being keen to line up against Barrett and RTS, the Waratahs will no doubt use the Blues’ call to send a ‘B’ team as motivation for another boilover. The last time the Waratahs beat three Kiwi teams in a single season was in 2015.

McDonald moved quickly to hose down any suggestion of the Blues snubbing the Waratahs with his decision to rest players.

“We are in no way disrespecting our opposition. We have a very healthy respect for the Waratahs and believe we have named a team able to perform to our standards against them,” MacDonald said in a statement.

“One of our major strengths this season has been the quality of our young players who have been fronting every week in training.

“We have had limited chances to see them under pressure in a game situation, and prepare for any potential injuries.

“We also lost our bye week and we have asked a lot of the guys in recent weeks and they have delivered in spades.” 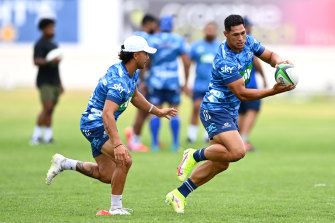 RTS in training with the Blues.Credit:Getty

Speaking with media in Auckland, McDonald said the weekend off would allow players to rest and give him a chance to plug game time into his wider squad.

But, on the eve of the finals, they are still chasing a win.

“It wasn’t a tough decision because we have seen a lot of evidence on the training field that they’re ready to go, and we have a lot of trust in them,” McDonald said.

“We are desperately keen to do well, we still have a lot to play for, this game is really important for us for momentum, we don’t want to lose momentum. We still think we can continue it and we are going over there to win.”

Veteran All Black lock Luke Romano, who joined the Blues from the Crusaders this year, will skipper the team.

“By no means are we going over conceding, we are going over to come back with at least four points,” Romano said.

McCall: Mako and Billy Vunipola still have a future with England