Home » Rugby » ‘No limit on how good we could be’: Vescio calls for AFLW change

AFLW star Darcy Vescio has added their considerable voice to calls for the season to be moved from summer, more matches and full-time professionalism, declaring it would also give players a greater chance to celebrate milestones.

Vescio, 28, hopes to go on and reach a century of goals but suggested there was a bigger picture at play. 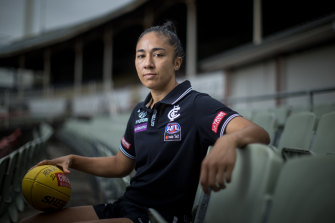 Darcy Vescio is the first player in AFLW history to kick 50 goals after scoring twice in round eight. Credit:Simon Schluter

“I hope so. Hopefully it doesn’t take another six seasons to get there and it might not be me,” Vescio said on Monday of reaching three figures.

“But I think the ultimate goal is players are kicking 50 goals in a season. I hope that we get to a point where there are enough games and I guess enough support around players to be able to do that.”

There is growing debate among players and clubs that the AFLW season should not be held in the heat of summer though it has started in summer through each of its six seasons. This latest campaign had been due to start in the new timeslot of December but was shifted to January because of pandemic and border issues.

There are also concerns the hard grounds at this time of the year are adding to a spate of serious knee injuries, but these could be occurring for a multitude of reasons.

That there will be four more teams next season, making an 18-team competition for men and women, has also sparked calls for the women’s home-and-away season to be expanded from what initially was slated as 10 rounds, and even begin in March or run parallel to the men’s season.

“I guess with 18 teams next year I would love to see a 17-game competition,” Vescio, a Blues player representative to the AFL Players Association, said. “Even playing 14 games is significantly different to 10 and 10 is different to seven. You want to be able to build form through the season. That’s where you will see bigger bags being kicked and higher scoring and that sort of thing. 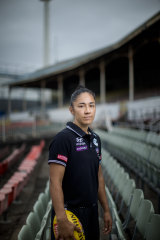 “Personally, I find playing in summer quite tough. I think the last couple of weeks we have had cooler games and that’s just made quite a difference coming into the game knowing you don’t have to worry about how you are going to battle the heat and having those sort of strategies. I am all for working around summer and trying to avoid those months.

Richmond star Jack Riewoldt, who has spoken with the Tigers’ AFLW players, is also among those pushing for a change in timing for the women’s season.

Vescio said full-time professionalism would add considerably to the spectacle. Most AFLW players are not full-time and therefore cannot complete as much training as the men. Many players are also still relatively new to the sport.

Players are pushing for full-time AFLW careers, but that is still some time off. The AFLPA wants this to happen by 2026, but the AFL has yet to endorse it.

“There is no limit on how good we could be. I feel like at the moment a lot of the players are coming in exhausted to the club and they feel like they are giving everything they can and they are only as good as much time as they can put into their craft,” Vescio said.

“I think about all the little things that we sort of miss out on, or that players are too exhausted to be able to put in those extra things that make you a better player. I am really looking forward to it.”

Melbourne’s Libby Birch, a columnist with The Age, recently detailed the strain players were facing.

“Can we keep expecting our female athletes to be stretched, year after year? The pandemic has brought the lack of flexibility and the toll of part-time contracts into sharper focus. That focus should lead to a rethink of what we expect from, and how we engage, AFLW players, coaches and support staff,” Birch wrote.

The AFL and AFLPA are working through a new collective bargaining agreement, under which the men and women could share a new deal. In December, the league released its Women’s Football Vision 2021-30, in which it aimed to make AFLW players the highest-paid sportswomen in any Australian domestic sporting competition by 2030.