Home » Rugby » ‘No one at the club thinks these results are acceptable’: Tigers boss opens up on Maguire sacking

Wests Tigers are at the crossroads yet again.

The joint-venture outfit is on the lookout for its fifth coach in nine years after sacking Michael Maguire during the week. It continues a miserable decade in which the Tigers have been the only club not to participate in the finals, a streak that will likely stretch into an 11th season after a poor start to their 2022 campaign.

The Herald’s chief rugby league reporter, Adrian Proszenko, sat down with Tigers chief executive Justin Pascoe to discuss Maguire’s axing, the club’s history of underperformance and how he intends to oversee a turnaround.

Should Maguire have been sacked?

There has been speculation about Maguire’s future for much of his three-and-a-half year tenure at the Tigers. The premiership-winning mentor only just survived an end-of-season review last year, only to be sent packing at the halfway point of the current campaign. So, why pull the trigger now?

“We are a results-driven business and we felt ninth, 11th, 13th and where we are sitting as we speak, 13th again, isn’t acceptable,” Pascoe said of Maguire’s results.

“It’s never a decision that’s taken lightly at all. There’s humans involved and we’re very conscious of that, but we need to do what we think is in the best interests of the club and moving the club out of the carousel that we’re on in not playing finals football.

“As we evaluated all the young talent we’ve got coming through from all the investment we’ve done through pathways, we asked whether Madge would be the coach in three or four years. We felt he wouldn’t be.

“To make sure we didn’t lose that talent pool that’s coming through and ensure it complements our current roster, we looked in another direction.”

When a club struggles for results, the coach is usually the one to pay the price. Bulldogs supremo Phil Gould, also on the lookout for a coach after parting ways with Trent Barrett, savaged the Tigers’ treatment of Maguire the night before he was sacked. 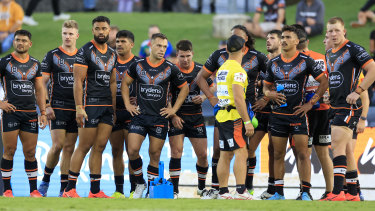 So did the Tigers give Maguire the support he required to succeed?

“Madge and the football department is more resourced now than it has ever been,” Pascoe said. “We spend nearly $2.9 million more on football this year than we did four or five years ago.

“One of my major roles as CEO is to make sure the organisation is resourced to ensure it is as competitive as possible. The one thing you can’t fault in the Wests Tigers board and the decisions they make is they will always put support around the coach and the employee rather than go the easy option and just sacking them.

“We always try to find ways to improve the resources to get the best opportunity to be successful. That’s what happened back in October last year when there was speculation over that well-documented review that was taking place. 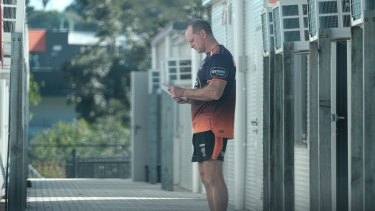 Michael Maguire was sacked by the Tigers on Tuesday, shortly after running a training session.Credit:Oscar Colman

“There were several changes that took place but, in the end, the results didn’t go the way we wanted them to.

“In regards to Madge, you can never second-guess his passion and commitment and hunger and competitive nature. But a change was needed.”

Who takes over from Maguire?

Brett Kimmorley has been installed as caretaker coach until the end of the season and Pascoe said the former NSW and Australia halfback would be in the mix for the job full-time should he make a strong start.

However, the man on top of their shortlist is Cameron Ciraldo. The Penrith assistant is considered the best up-and-coming mentor in the game, although there will be competition for his signature from several other clubs, including Canterbury. Pascoe said no contact had been made with any potential replacements as yet, but confirmed Ciraldo would be approached.

“He’s one of many that we should speak to, there’s no doubt about that,” Pascoe said. “He’s well credentialled, as others are that we’ll be speaking to. He was [at Penrith] when I was there; we obviously have a relationship. He and others would be a good fit, but until we do our due diligence and the individual person does their due diligence, that will determine who is the right fit.”

Pascoe echoed the sentiments of head of football Tim Sheens, who said the club was looking for a “development coach” to help bring through the promising crop of youngsters in their system. The candidates are likely to include Ciraldo, Kristian Woolf, Jason Ryles, Brett Hodgson, Paul Green, Shane Flanagan, Brad Fittler and Ben and Shane Walker.

“It doesn’t need to be a seasoned coach and could be a rookie,” he said. “We’re looking for a person who best fits what we’re trying to build and believes they can come in and add value across the organisation.” 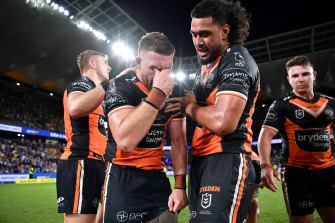 It’s been a long time between finals appearances.

Given the club’s long history of underperformance, why is there reason to believe that the next clipboard holder will be more successful?

“The club’s resources, environment and where the club is at the moment provides an opportunity for someone to come in to grasp this opportunity,” he said. “It was well-documented by head of footy Tim Sheens that we’re looking for a development coach; we’re looking for someone who can take this next group of youngsters and nurture, develop, inspire and motivate them to be Wests Tigers players for the next 10-15 years.”

Wests Tigers – a merger of Balmain and Western Suburbs – was formed in 1999. Since then, they have made just three finals appearances, including the fairytale 2005 grand final triumph. They haven’t participated in the post-season for a decade and, given their current ladder position, that unwanted streak is likely to continue this year.

“It’s not acceptable at all,” Pascoe said. “No one at the club – from the board, myself and all the way down – thinks these results are acceptable. None of us. We all hold ourselves to a higher standard, we have a clear directive about where we want to take this club on and off the field, and we’re working hard to get to that point.”

Pascoe, who has been at the helm of the club since 2015, took his share of responsibility for the long finals drought.

“The results on the paddock haven’t been where we want them to be at all,” he said. “When I took on the role back at the end of 2015, I had four clear objectives for myself. Those were to make the club financially sustainable, to get it into an environment that is elite by moving us out of the old Concord, and we’re now three weeks away from moving into what will be the benchmark [centre of excellence] in regards to rugby league and sport on the eastern seaboard.

“I wanted to get the club to be in a position to be a development club again and back to our roots in regards to our traditional areas. And then obviously to get us into a position to win multiple premierships. That certainly hasn’t happened.” 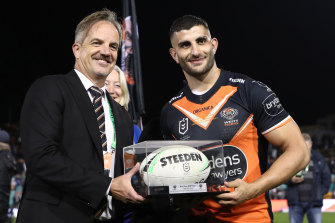 When a marquee man comes on the open market, they are invariably linked to the Tigers. In recent years the club has missed out on a slew of targets, from Latrell Mitchell to Josh Addo-Carr. In the past, too much money has been offered to the likes of Josh Reynolds, Moses Mbye, Ben Matulino and Russell Packer, bending the salary cap out of shape. However, the Tigers believe they have addressed the issue to the point where they have cash to splash on another big name to complement incoming stars Apisai Koroisau and Isaiah Papali’i.

“As we sit here now, it’s a really balanced salary cap,” Pascoe said. “There is still room to move for 2023. Over the past two years in particular, we’re very patient and strategic in how we attack the marketplace.”

The Tigers are a long way from the “destination club” they aim to become, but Pascoe believes the days of paying “overs” or missing out on targets is over.

“I think it’s already changed with the recent signings of Koroisau and Papali’i,” Pascoe said. “They are outstanding players and humans; we’re looking forward to having them on board. I don’t see, over the past two-and-a-half years, that we’ve had an issue attracting talent. The club has set up strong foundations to attract the right talent, as you’ve seen with Isaiah and Api and the re-signing of some of our young guns like Stefano Utoikamanu.

“We’re set up to continue to attract players at the right market value.”

Funa Pole, Justin Matamua, Cayne Nicholas, Finnley Neilson, Emmanuel Di Bartolo and Joseph Delle. You haven’t heard of them yet, but they are considered to be among the most promising juniors in the game. They also happen to be part of the Tigers nursery, but keeping them in the black, white and gold will be crucial if a revival is to happen.

“It’s absolutely critical,” Pascoe said. “Tim Sheens and head of recruitment Warren McDonnell have said this is the best young crop of kids coming through since the days of Benji Marshall, Robbie Farah, Liam Fulton. This is a really critical decision, the appointment of this coach. It’s a decision that can help nurture this upcoming group.

“You talk about salary cap management, the best way to do that is to develop your pathways and bring talent through from the bottom up. Obviously, as every club will do, you need to go out and cherry pick the marquee players here and there.”

The Tigers’ facilities at Concord have arguably been the worst of all of the NRL clubs for decades. However, that will change when the players step into a new $75 million facility next month.

“Is it a game-changer? Absolutely it is,” Pascoe said. “It’s a legacy for the club. It’s not just about bricks and mortar, it stimulates an elite environment. This facility is a benchmark, it can’t do anything than drive positive outcomes. It’s going to attract players, it’s going to help retain players and staff.”

England vs USA live stream: How to watch rugby union match online and on TV today

Who have been the pick of the pick-ups in AFL free agency?