Home » Rugby » ‘Nobody likes us in Sydney’: Storm embrace role as GF villains

A defiant Cameron Smith says the Storm don't need pats on the back from anyone outside the club bubble and are content to play the villains when they try to snap Penrith's winning streak and ride out of Sydney with another premiership.

The Storm's path to the grand final on Sunday has taken them away from Melbourne, via Albury and Queensland's Sunshine Coast, where they have spent more than half the season. They played only two games at AAMI Park, both in front of sparse crowds, before being forced out of Victoria by the COVID-19 outbreak. 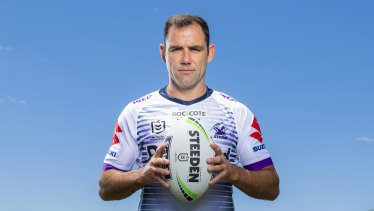 No one likes us, we don’t care: Cameron Smith on Monday.Credit:Getty

"We are not looking for any sort of acknowledgement from anyone. We just want to go out and hopefully satisfy ourselves that we have given ourselves a chance to play well and hopefully bring the trophy back to Melbourne.

"We don’t go chasing that [pats on the back]. Being down in Melbourne we are out of the limelight naturally and that is the way we like it. We're not out for any type of acknowledgement this week other than wanting to play well and give ourselves an opportunity."

Few coaches do siege mentality better than Bellamy. He told the team to expect to be cast as outsiders during the post-season and they will relax in their Sunshine Coast bubble before flying to Sydney on Saturday afternoon.

Melbourne five-eighth Cameron Munster said "nobody likes us in Sydney" and that success had bred contempt from rival clubs, fans and certain sections of the media.

We've been so successful for the past 12-15 years. That's not ideal for the Sydney clubs, they've been around a lot longer than us.

"It's funny … living in Melbourne, you don't get too much media. We're pretty much in the classifieds. Coming to Sydney, when you play games or grand finals, you realise how much stuff they carry on about. It's pretty funny," Munster said.

"Nobody likes us in Sydney. That's understandable. We're from Melbourne and it's not a rugby league town. We've been so successful for the past 12-15 years. That's not ideal for the Sydney clubs, they've been around a lot longer than us.

"In saying that, we'll go down there with a lot of confidence. We've been playing against hostile crowds for almost all of the season. It's no different for us."

The backdrop of it all will be Smith's future. Many believe he has already told the club he is retiring, which prompted the mini-celebration at Suncorp Stadium on Friday night.

Smith said he understood the interest but there would be no updates during the week. He wants the team and its younger players to focus on trying to beat a Panthers side on a 17-game winning streak.

"I totally understand there is going to be interest in what I am going to be doing next year but players retire all the time. We’ve lost a few great players this year. Everyone just needs to enjoy grand final week," Smith said.

Melbourne are favourites but the Queenslander in Smith sent him scurrying for the underdog tag. He said Penrith had been the best team all season and nothing would change that before Sunday.

"What we have done over the past 22 matches won't get us the result on Sunday. We need another good week of preparation and do our best against Penrith who have been the best team in the premiership by far," he said.

"You ask anyone that has followed the NRL this year, they have won 17 in a row and you don't do that without being a good footy side.

"They have a very experienced coach [Ivan Cleary], who has been on the big stage as a player so he knows exactly what will happen this week.

"They have showed the way they play this year they are a very confident young footy side. Being in Sydney, they will embrace the week and I can't see them having any sort of challenges with the pressure."