Before a ball had been bounced in anger in Hobart between North Melbourne and the Gold Coast Suns, the support act had already upstaged the headliner. For those coming in late, that was Gold Coast Suns chairman Tony Cochrane – a man not known for restraint – telling a radio station that granting Tasmania an AFL license would be “insanity”.

Cochrane’s opinion was based on two poorly-attended recent games in Hobart and Launceston. Never mind that the Suns don’t come close to filling their own purpose-built stadium at home, or that many still wonder about the wisdom of the AFL granting the Gold Coast a license after a decade of heavily-subsidised underperformance. 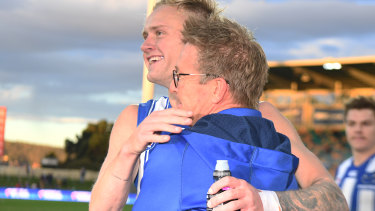 Tasmanian Premier Peter Gutwein, sensing a political opportunity, declared in response that a Tasmanian team would “flog” the Suns and, for good measure, encouraged fans to boo Cochrane on sight. It was all good theatre: two vaudeville clowns throwing pies at each other, a fitting warm-up for a battle between 16th and 18th on the ladder.

Cochrane should look after his own backyard. Because it was the Kangaroos – kicking against a strong breeze in the last quarter – who held on for just their second win of the year, with Cameron Zurhaar capping a brilliant individual game with a kick from outside the boundary line to seal it.

The Kangaroos were far too strong around the contest for Suns, with ruckman Todd Goldstein, Ben Cunnington, and Luke Davies-Uniacke racking up a massive 46-27 advantage in clearances. But they couldn’t finish their work, and a wasteful scoreline of 9.18 often betrayed a team lacking confidence in themselves to win. 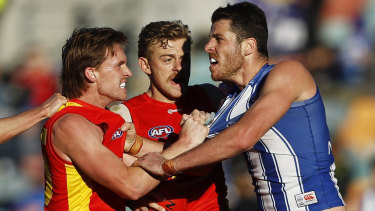 But the same could be said of the Suns, who also sprayed their opportunities to reel in an 11-point margin at the final change. They showed far more spirit than in their two previous matches against Port Adelaide and Fremantle, but again, too much was left to Touk Miller and Hobart local Hugh Greenwood, who fought a magnificent battle with Cunnington.

North had greater depth of commitment. Nick Larkey was highly-influential with three goals, a direct assist, and eight marks. Ben McKay completely nullified the Suns’ best forward Ben King, and Josh Walker took a game-saving late mark. Jy Simpkin was prolific. It wasn’t a victory full of class, but it was full of heart. 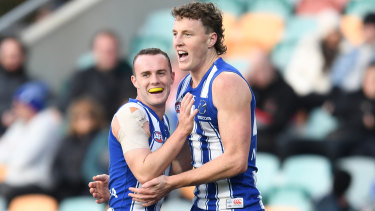 Jack Mahony and Nick Larkey celebrate a goal for the Roos.Credit:Getty Images

The Suns are badly missing full-back Sam Collins, who would have taken Larkey, and Jarrod Witts, as much for his leadership as his ruckwork. Jeremy Sharp, in his third game, showed spark with his 20 disposals, and so did Sam Flanders. But it would have been hard for Cochrane, or coach Stuart Dew, to find much to like otherwise.

They have Richmond next up, and on current form will struggle to win another game this season. That might give Cochrane, Dew and possibly Gil McLachlan a bigger headache than the future of the game in Tasmania. It’s not as if the sanity of attempting to establish another sporting franchise on the Gold Coast has never come into question.