Daly Cherry-Evans gets us underway. Only 80 minutes until the season ends for one, while the other will book a date with South Sydney.

Big blow for Penrith with Origin star ruled out

I know we’re about to start the first semi-final, but there’s some big breaking news out of the second semi-final on Saturday night. Penrith winger and metre eater Brian To’o has been ruled out with a minor ankle complaint. He will be replaced by Brent Naden.

Maybe that explains why Ivan Cleary was so terse earlier today in his press conference. You can read about it here.

Who are you tipping?

I know the Roosters have been unbelievable to get to this point with the injuries they’ve had, but I think this is the night where the fuel tank might finally run out. And I’ve maintained all week I think the Sea Eagles will do this handsomely, despite being blown off the park by Melbourne last week. They haven’t left the Sunshine Coast, have had one extra day to recover while the Roosters went to Townsville and back.

I suppose that’s a long way of saying Manly to win by 16 with Brad Parker to grab a try.

Who are you tipping?

The fans are well and truly streaming into BB Print Stadium now in Mackay with a line around the corner.

There’s a surprising amount of fans here in club colours, but a majority of the crowd are in neutral gear. Sorry to those shivering away in Sydney, but it’s shorts and shirt weather up here with hardly a mask in sight.

The paddock is also a spectacular shade of green so huge shout out to the ground curators. The scene is officially set for a fabulous night of regional rugby league. 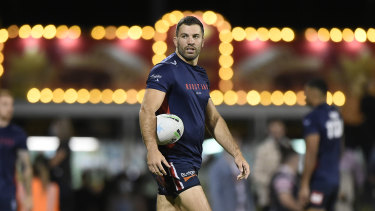 James Tedesco during the Roosters’ warm-up in Mackay.Credit:Getty

Team news: one change for both teams

Only one change to both teams from the squads named on Tuesday.

We knew there would be one for the Roosters with Ben Marschke coming in at hooker to replace the suspended Sam Verrills. Sam Walker starts from the bench.

But Des Hasler has shaken up his pack with Sean Keppie, named on the interchange earlier this week, promoted to the starting side in place of Martin Taupau, who is back to the bench. Moses Suli is 18th man.

Hasler has just done an interview with Nine. I don’t think he could have said less if he tried. It’s been that type of week for paranoid coaches. 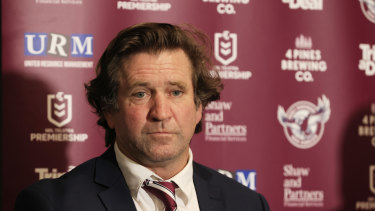 Manly coach Des Hasler has triggered a bonus by finishing in the top four. Now he can get a haircut.Credit:Getty

Sam Walker’s role up in the air

As if they could afford to lose any more players, the Roosters will go into this game without first-choice hooker Sam Verrills after that controversial two-game ban as well as Siosiua Taukeiaho after a leg injury he sustained in the last-gasp win over the Titans last week.

Ben Marschke, who started the year as the club’s fifth-choice dummy-half, will get the call-up for Verrills, while Manly’s No.9 Lachlan Croker will also return from injury.

But this big talking point for me is how does Trent Robinson use Sam Walker? He’s played a grand total of 23 minutes in the last three weeks starting from the bench, albeit kicking the winning field goal against the Gold Coast.

Does Robinson throw him into the game in the first half? If they’re chasing points? Or in the dying minutes again? So many questions, and only a three-time premiership-winning coach would know the answer. 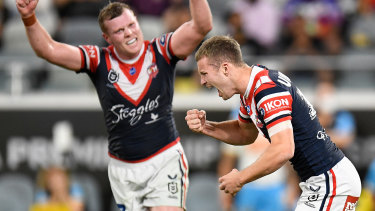 Naturally, the talk has only been about the two fullbacks this week. The NSW teammates. Australian buddies. And perhaps the two best players in the game at the moment. They won’t solely be responsible for the result of this game, but you can bet your last dollar they will have a fairly significant say.

Colleague Christian Nicolussi penned this great piece earlier this week with Trbojevic deflecting to Tedesco as the No.1 fullback in the game. You can read it here.

And I thought there was some really poignant remarks from Roosters coach Trent Robinson about how Tedesco has carried the tricolours in the face of one of the most horrific injury tolls on record. You can read Andrew Webster’s column here.

Hello and welcome to Friday night finals footy, with just five games to go in an NRL season where you would be forgiven for thinking it might not have made it to its natural end. But here we are, two Sydney teams playing in the glorious surrounds of Mackay, in central Queensland. It’s just so natural.

Anyway, it’s the battle of the beaches. Teddy v Turbo. Robbo v the raving lunatic with all the hair. JWH and DCE. Roosters v Sea Eagles. It will be all over soon for one of them, the winner progressing to a showdown with South Sydney for a spot in the grand final. 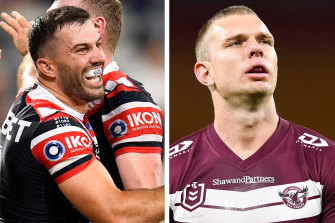 The showdown between James Tedesco and Tom Trbojevic promises to be a highlight on Friday night.Credit:Getty