The NRL has rubbished suggestions it has shirked its responsibilities regarding Israel Folau’s playing future as the Queensland Rugby League is left to make a decision on the most polarising issue in Australian sport.

Folau is seeking to make a comeback for the Southport Tigers in the Gold Coast A-grade competition this weekend. The club’s patron, billionaire businessman Clive Palmer, is backing Folau’s bid and has threatened to bankroll a Federal Court injuction on religious discrimination grounds if the cross-code star isn’t registerd by Wednesday. 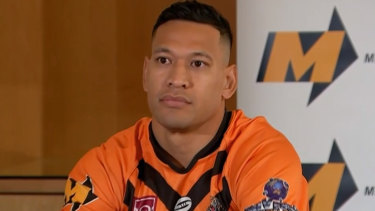 Israel Folau is facing several obstacles in his bid to return to rugby league.Credit:Nine

“Our job is to register the premiership and the 16 NRL clubs. If an NRL club presented a contract for any player, we would take a look at it and make a decision based on individual merits.”

Asked if he felt Folau’s bid to play for the Southport Tigers was part of a larger plan to return to the NRL, Abdo said: “I’m not sure. It would appear from Clive Palmer’s public statements that isn’t the case.

“This is about Israel playing footy with his brothers, going on what Clive Palmer has said.”

“I said just make sure you give process,” V’landys said. “Bruce Hatcher is a good administrator, he’s been there a long time. He’ll know what to do.”

The QRL is poised to convene an independent panel to determine whether Folau should return to the game in which he made his name. The decision-makers on it are likely to include a retired judge and former senior politician.

A potential stumbling block to Folau’s return could be seeking a release from Catalans Dragons. The Super League club claims the 32-year-old remains contracted to them and the QRL is attempting to get to the bottom of the matter. Should that hurdle be cleared, the QRL is also seeking to install clauses into any potential contract that prevent Folau from expressing his controversial religious views.

Palmer has vowed to throw his considerable resources into registering Folau, but his Southport Tigers signing spree may not end there. The third-tier club is also looking to register former NRL star Tony Williams, whose playing contract with a New York franchise was terminated after his remarks in support of convicted rapist Jarryd Hayne. Williams has publicly apologised for the comments.

Steve Diamond insists England will be poorer if they end relegation