The NRL has laid down a marker for excessive involvement from trainers on the field, fining the Eels over a controversial incident in last week’s western Sydney derby win over title favourites Penrith.

Paramatta received a breach notice proposing a $5000 fine after blue shirt trainer Steve Murphy sprinted in front of the goalposts as Nathan Cleary attempted a sideline conversion in the two-point loss at BlueBet Stadium.

There’s no suggestion Murphy ran in front of the posts in an attempt to distract Cleary. But the NRL has issued a warning to the rest of the competition about the unnecessary involvement of trainers on the field.

Murphy, one of Brad Arthur’s assistant coaches, has an exemplary record over many years and was back running water and instructions from the sideline in the Eels’ clash against the Roosters during Magic Round on Sunday.

Cleary’s kick would have given the Panthers a 16-10 buffer against the Eels, but instead preceded a Parramatta fightback. It’s the only game Penrith have lost through the opening 10 rounds this year and snapped their near three-year, 21-game winning streak at home. 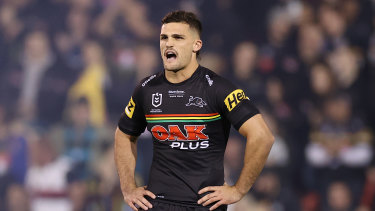 NRL chief executive Andrew Abdo will consider the Eels’ response to the breach notice as the game celebrated its third staging of Magic Round, which drew more than 130,000 fans through the gates across three days at Suncorp Stadium.

Abdo personally thanked the Suncorp Stadium ground crew after a week of torrential rain in south-east Queensland, with the playing surface holding up remarkably well.

“It’s always nerve racking because we can’t control the elements,” Abdo said. “They do have an absolutely fantastic grounds crew and the drainage has been fantastic.

“The way they’ve worked each night and day to get the pitch ready for the next day is a real testament to the skill and dedication of the ground staff. We’ve been able to see some great football even thought we’ve had huge amounts of rain.

“This is our third Magic Round and it just gets bigger and better. It’s a new tradition, and like any tradition it grows over time. As soon as the draw goes out, fans want to lock it in their tickets. It’s not just the fans, but the players. To have the whole rugby league family is unique. All 16 clubs have been represented throughout the city.”

Magic Round will return to Brisbane for the next two years.

The field to replace Hocking as AFL footy boss