Newcastle Knights handed Brisbane Broncos their fourth-straight defeat since the NRL season resumed as they ran out 27-6 winners at Central Coast Stadium on Thursday.

First-half tries from Kurt Mann and Hymel Hunt helped the Knights into a 13-6 lead at half-time, although Xavier Coates’ length-of-the-field score from an interception had been a ray of hope for Anthony Seibold’s side.

But Newcastle pushed further ahead early in the second half through influential forward Daniel Saifiti and wrapped up the win late on through a try from Mitchell Pearce.

As well as remaining winless since the NRL season restarted, the Broncos have now failed to score a try in the second half in their previous four games as well. They were not helped by having two men sin-binned either.

The Knights went into this contest aiming to rebound from suffering their first loss of the season the previous week and made the most of a spell of pressure early on to take the lead in the 10th minute when Pearce sent half-back partner Kurt Mann racing in for the opening try.

Mann had a hand in Newcastle’s second try 11 minutes later following a penalty which saw Brisbane full-back Jamayne Isaako sin-binned for a professional foul on Kalyn Ponga, putting in a low kick to the right wing as the hosts attacked for Hunt to scoop up and dot down.

Coates, who had a possibly try ruled out by the video referee on 15 minutes, dragged the Broncos back into the contest on the half-hour mark by intercepting from Andrew McCullough and streaking clear for a converted score. 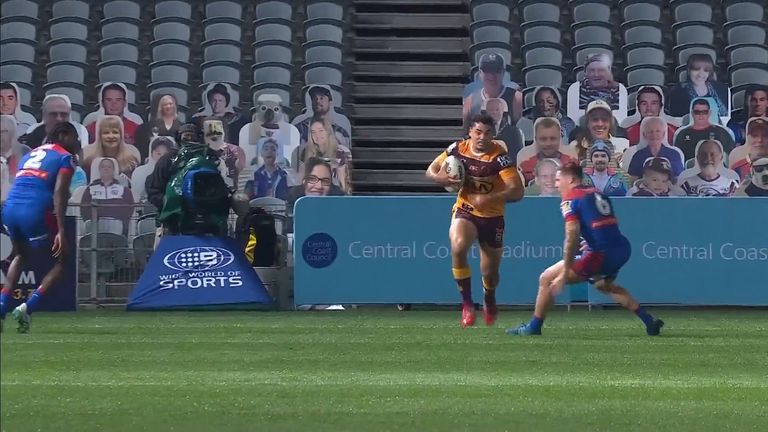 But Pearce’s drop goal on the stroke of half-time edged Newcastle further ahead and they extended that lead four minutes after the restart when Saifiti twisted his way out of a three-man tackle to get the ball down.