He took attention away from the grand final build-up after being busted for cocaine, but former Canterbury forward Ofahiki Ogden has had his drug possession charges dismissed and must instead comply with the terms of a court order.

Ofahiki pleaded guilty to possessing a prohibited drug and not complying with a noticed direction at Waverley Court House on Tuesday. Police officers pulled over Ogden’s Mazda 3 on the eve of the Panthers-Rabbitohs decider on October 3, finding two satchels of white powder. 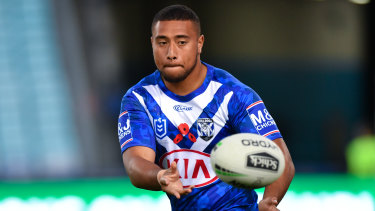 The charges were dismissed after Ogden was discharged into the care of a responsible person. Under the terms of the court order, the 25-year-old must continue ongoing treatment for mental health including, take medication as required, attend treatment and therapy for drug and alcohol issues and abstain from the use of illicit and prohibited drugs.

The Ogden incident occurred just days after Warriors rookie Reece Walsh was caught in possession of cocaine when he was arrested by Queensland police in Surfers Paradise.

Storm players Cameron Munster, Brandon Smith and Chris Lewis were also sanctioned after they were filmed partying in a hotel after their preliminary final loss, with what appeared to be white powder on a table.

Ogden’s Canterbury contract, during which he made 45 NRL appearances for the Bulldogs, lapsed on October 31 and the club chose not to offer him a new one.

Given he has escaped a conviction, the NRL may consider registering a new contract should a club attempt to sign him.

Ofahiki told the Herald two years ago that he was keen to transition into the police force when his NRL career was over. He said he had already begun a policing course before shifting from his native New Zealand.

“It’s something I’m still looking into after footy,” Ogden said in 2019. “I like helping the community, giving back.”

Given the number of incidents in quick succession, the NRL has flagged its intention to put hair follicle testing for illicit drugs back on the agenda.

Under the terms of the collective bargaining agreement, the NRL and the Rugby League Players’ Association have agreed to review the game’s illicit drugs policy. One of the proposals head office is keen on tabling relates to hair follicle testing, which can detect substances like cocaine up to three months after ingestion.

Under standard urine testing, traces of cocaine usually disappear after between one and four days. The AFL uses hair testing as a detection tool rather than for sanctioning purposes, while hair testing of racing animals began in Queensland last year. The RLPA would need to agree to any changes in testing protocols for league players.

Harry Grant has committed to the Storm for next season. Here’s how the Tigers plan to keep him