North Queensland Cowboys v Cronulla Sharks, 6pm Friday, Queensland Country Bank Stadium
Townsville has once again become one of the hardest road trips in the game but the Sharks might be visiting at precisely the right time following a brutal Origin.

Both teams are in fine form, stringing together four straight wins apiece to find themselves at the pointy end of the NRL ladder. Jeremiah Nanai and Val Holmes are rested for the Cowboys but Tom Dearden and Tom Gilbert are set to play. Nicho Hynes (COVID-19) is back for the Sharks and Siosifa Talakai has been listed among the reserves after a tough night at Suncorp Stadium. Very little between these teams but hard to tip against the hosts. Cowboys by 2.
Phil Lutton

Parramatta Eels v New Zealand Warriors, 7.55pm Friday, CommBank Stadium
Surely Parramatta are not capable of putting in a second successive howler, even if they did get the chocolates in the end last time. And surely the Warriors are unable to lift like they (kind of) did before a parochial home crowd last start. The Eels will be primed for a big performance, especially Reagan Campbell-Gillard after his Origin snub. The blue-and-golds were out-enthused by Souths a fortnight ago, and the Bunnies have since franked the form. As for the Warriors, even though they won at Mt Smart Stadium, they took an eternity to put away a dreadful opposition. Eels by 12.
Christian Nicolussi

Sydney Roosters v St George Illawarra Dragons, 3pm Saturday, Central Coast Stadium
The Roosters were excellent against the Panthers and should they reproduce that form they will have no issues against the Dragons. The freshen-up will also do the Chookies some good after a tough month of footy, not to mention a few bumps and bruises. The Dragons have scraped home against a few teams below them on the ladder, and while the Roosters are just that, this will not be a close contest. Roosters by 18.
Christian Nicolussi

Manly Sea Eagles v Newcastle Knights, 5.30pm Saturday, 4 Pines Park
Wednesday night may well have served as a warning shot for Manly. Newcastle fullback Kalyn Ponga returns to the Knights full of confidence after a man-of-the-match performance in the State of Origin decider, while Jacob Saifiti bolsters the pack after a stellar debut in sky blue. Knights five-eighth Anthony Milford plays his 200th NRL game, which makes his debut at Canberra feel like a lifetime ago. Daly Cherry-Evans and Jake Trbojevic are set to back up for the Sea Eagles, who enter as favourites as they fight for breathing room in the scramble to the top eight. Cherry-Evans links up with an in-form Kieran Foran in the halves and they should be able to lead their side to a fourth win from five starts. Sea Eagles by 8.
Caden Helmers

Gold Coast Titans v Brisbane Broncos, 7.35pm Saturday, Cbus Super Stadium
At the start of the season, this would have been one worth watching for the locals in Queensland’s southern corner. Alas, the Titans are terrible in 2022 and even if Brisbane are missing a few top liners from Origin, it looks like another long night for coach Justin Holbrook. Adam Reynolds just has the Broncos purring along and they march into battle behind their new general. Easy work for the Broncos. Brisbane by 12.
Phil Lutton 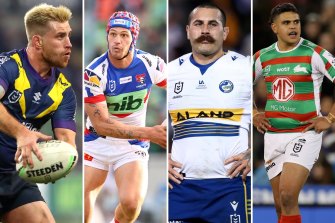 Wests Tigers v Penrith Panthers, 2pm Sunday, CommBank Stadium
No Origin players for the Panthers, still no love for the Tigers – at least as far as the early markets go. Penrith have back-up halves Sean O’Sullivan and Kurt Falls coming in behind a pack that still boasts Viliame Kikau, James Fisher-Harris and Moses Leota – the last time they were left to carry the load Kikau went to another level and ran amok against the Bulldogs. Not for nothing either, Penrith’s NSW Cup outfit is top of the second-tier table too thanks to the club’s incredible depth. The Tigers improved against Parramatta but the three-into-two playmaking dance between Luke Brooks, Jackson Hastings and Adam Doueihi is still yet to hit the right notes. Shifting Hastings – who has touched the ball more than any other half in the game this year – to lock seems counterintuitive to his dominant playmaking style. Panthers by 10.
Dan Walsh

Melbourne Storm v Canberra Raiders, 4.05pm Sunday, AAMI Park
The Storm plan to welcome back Felise Kaufusi after he rushed to the US to be with his ill father while they will be nervously watching hooker Harry Grant after he copped a painful corked glute late in Origin III which will be tough to get right on a four-day turnaround. The Queensland win will no doubt give the Storm a boost as they look to regain the form they showed pre-Origin and Grant has been a big part of their best performances. Cameron Munster has been named but whether he clears COVID-19 protocols in time remains to be seen. The Raiders always seem to find something extra for their trips to Melbourne and they are fast reaching the point of the season where they need big wins if they want to push for another finals appearance. Jack Wighton and Jamal Fogarty are good enough to cause Melbourne problems if they are on song. Storm by 4.
Roy Ward

Canterbury Bulldogs v South Sydney Rabbitohs, 6.15pm Sunday, Accor Stadium
The scoreboard was flattering to the Rabbitohs when they met on Good Friday, the match swinging on Jeremy Marshall-King’s sin-binning after the Bulldogs made a bright start. Canterbury are a much better team than they were in April, but so are the Rabbitohs, who have been enthused by Latrell Mitchell’s return. There will be a host of State of Origin stars to be monitored after game three, while Tevita Pangai jnr (ankle) is in line for a miraculous recovery after being hurt against the Sharks. Braidon Burns is named for his first NRL game since Good Friday. Alex Johnston (quad) and Mark Nicholls (concussion) are poised to play for the Rabbitohs, winners of eight of their last 10 against the Bulldogs.
Adam Pengilly