The NRL will be asked to reconsider Manase Fainu’s suspension after two witnesses came forward to claim the Manly hooker was not responsible for the stabbing of a man at a Mormon church dance.

In a further development, police will treat one of their own witnesses – who allegedly confessed to the stabbing before backflipping – as “unfavourable”.

Fainu has pleaded not guilty to wounding a person with intent to cause grievous bodily harm, affray and recklessly causing grievous bodily harm in company over the incident at a church dance in Wattle Grove in 2019. His trial was scheduled to be heard last month but the pandemic will result in a 12-month delay.

Fainu’s bail conditions were varied on Monday so that he only needs to check in with police three times a week instead of every day. The requirement to be chaperoned by his parents at all times will now only apply to movements between the hours of 9pm and 6pm.

“The alleged victim doesn’t know what happened to him,” said Fainu’s lawyer, Paul McGirr. “There are two other defence witnesses that were not interviewed by police and I am confident that they will say it was not my client that was the perpetrator of this offence.”

Police witness Jona Faingaa, known as “Big Buck”, was charged with affray for his role in the incident. Faingaa, the younger brother of Sea Eagles forward Haumole Olakau’atu, allegedly told family and community members that he was responsible for the stabbing but subsequently changed his story. The defence will call witnesses said to have heard the confession. 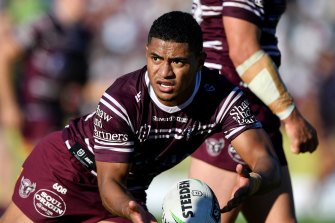 Prosecutors on Monday sought a section 38 order, that would give them leave to cross-examine Faingaa as an unfavourable witness.

“Basically they will treat one of their own witnesses as unfavourable, which is the bloke who has admitted to doing it,” McGirr told the court during Monday’s meeting.

“Originally he met with family members and the community and said it was him. After the incident, he admitted to doing it, to dumping the knife and now he has backflipped.

“Bearing in mind that he was allegedly owed a debt, that all made sense … he was the person who had a grievance with someone who was going to be at that location.

“So the police haven’t interviewed all the witnesses that he admitted to doing it to, and secondly there are two other witnesses who were present at the scene who also weren’t interviewed by police, who we envisage will be coming along to say it wasn’t our client who did the actual stabbing.

“It certainly gives weight that it wasn’t my client and based on those particular factors. Serious consideration is being made to take this particular information to the NRL. Through no fault of his own, [Fainu’s] trial is looking at [being heard] next August.”

Fainu is suspended under the NRL’s ‘no fault’ stand-down policy, where players charged with an offence carrying a penalty of 11 years or more are automatically suspended.

Fainu’s manager, Mario Tartak, urged the NRL to consider his client’s right to play given the new information.

“I’m hopeful the NRL considers the impact COVID has on the strain of the legal system,” Tartak said.

Fainu was one of the games’ most promising players before the incident halted his career. He gave an insight into the ordeal during interviews they provided to the Facebook page of his management, Crown International Sports Management, last year.

“It affected my family heaps,” Fainu said of his time in jail. “They were devastated, shocked. When I made phone calls to them from inside, I could just hear from their voice that it was just pure sadness through their voice.

“When my mum and that visited me, it is something that I don’t want to happen again … I learnt a couple of lessons in there, who are my real friends. Some people came and saw me. Some people I thought who would didn’t.

“When I was inside, it was actually making me think. I didn’t know how long I’d be in there.

“I didn’t know what would happen to my playing contract, I didn’t know nothing about that. I didn’t have a phone to contact my manager to see what happened.”