Here is the proof the NSW government granted the NRL permission to restart the competition.

NSW Police Commissioner Mick Fuller sent ARL Commission chairman Peter V’landys a letter – obtained by the Sun-Herald – that confirms the governing body is within its rights to get the season back under way. 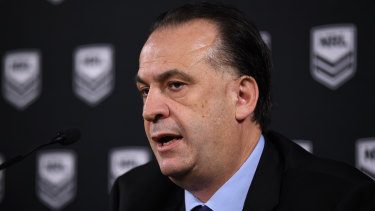 ARLC chairman Peter V’landys has a written guarantee that the competition can recommence.Credit:AAP

“I don’t think they are a law unto themselves,” Kelly said on Friday. “Some of the players and coaches may think so, but they’re part of society and they have a part – as we have all done – to support not only safety for themselves but for all of us.

Fuller clarified that NRL players and staffers would be exempt from the order not to remain at their place of residence to stop the spread of the virus.

“I have assumed that all matches will be played at outdoor venues (noting that indoor recreation facilities must now be closed to the public),” Fuller wrote.

“Nevertheless, it is recommended that any outdoor facility used should also be closed to the public as it would not be a reasonable excuse for spectators to leave their homes to attend.”

Fuller said the usual social-distancing protocols must apply where practicable and concluded with: “In summary, subject to compliance with the matters dealt with above, the NSW Health Minister’s directions would not preclude the commencement of the modified NRL competition.”

A series of meetings this week between the major stakeholders will determine how long the season goes for. Depending on the appetite of the broadcasters, the entire regular season could go ahead as originally scheduled or the teams could face each other just once. Greenberg will meet with Fox counterpart Patrick Delaney, although he is unlikely to play a significant role in conversations with Nine.

Demons have ‘no doubt’ Jackson, Brayshaw will stay

Mitchell wins race for opener but Wingard out until April