A James O’Connor try after the siren handed the Queensland Reds an unbelievable Super Rugby AU victory, with the Brumbies falling at the death yet again in a classic for the ages.

In one of the greatest finishes Australian rugby has seen, the Reds, well into extra-time, crossed the paint through O’Connor, the team’s inspirational leader. 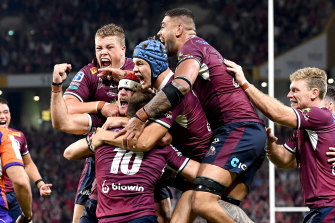 James O’Connor is swamped by teammates.Credit:Getty

Reds players shouted “Queenslander, Queenslander” on the sidelines moments after their 19-16 victory, which will be celebrated long into the night. It was a just reward after their brilliant season.

It was beautiful rugby chaos in the final moments. Bodies everywhere. Arms and legs sprawled across the ground. Taniela Tupou waving his finger in the air, believing he’d grounded the ball on the full-time siren.

But with no conclusive evidence, the Reds retained possession, with 15 players to the Brumbies’ 13.

The Reds continued to fight, grinding for every metre. They came close half-a-dozen times, before shifting the ball left, into O’Connor’s hands. 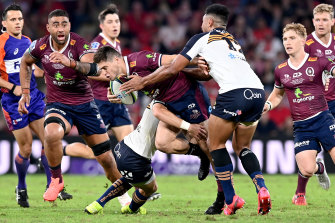 In terms of storylines, this game had it all. It was the antithesis of the previous meeting. Free-flowing rugby – 78 points that evening in Canberra – played second fiddle to astute game management, penalties and energy-sapping scrums.

It was a fairytale finish for the Reds, who nearly fell at the final hurdle once again, save for some Queensland spirit.

Ten years on from their famous Super Rugby title, the Reds managed to outdo themselves.

“It was a tough contest,” O’Connor said. “That was a Test match. Super proud of my boys. I’m bloody stoked.”

Down 13-6 at half-time, the Reds found a spark. They forced a Tom Wright knock-on through line speed pressure before Jordan Petaia’s chest flicked the paint, otherwise he would’ve had a contender for try of the year.

The Brumbies were reduced to 14 men from the 60th to 70th minute when Rob Valetini went to the bin for a high shot.

They didn’t concede a point in this period and were incredibly brave, even to the final second.

After last year’s decider, Brumbies coach Dan McKellar remarked: “It feels really good because we had to work for it”.

Before this match, he quipped: “They have a view it’s their year”.

He will be twice as gutted after this enthralling contest, for this was physicality at its finest. Never has McKellar looked more stressed in the coaches box.

There was revenge in multiple forms waiting to be served. A couple of two-point losses against the Reds was all the motivation the Brumbies needed and McKellar’s comments in recent weeks suggest deep down he felt his side have always been superior at heart.

O’Connor couldn’t get into a rhythm in the opening 40 minutes yet found his groove when it mattered most.

Regardless of what transpired across 80 minutes, this game had broader significance for Australian rugby.

The 41,637 fans who paid their hard-earned cash to be at Suncorp Stadium won’t forget that anytime soon.

Such a crowd, given the game’s health in recent years, is nothing short of remarkable. Free-to-air exposure has without a doubt created greater interest and Stan’s coverage for subscribers has proven to be a cut above. The numbers in coming days will be telling, particularly with Wallabies Tests two months away.

After an early O’Connor penalty, Queensland struggled for possession before Tom Banks crossed in the 13th minute, thanks to a final pass from 21-year-old Noah Lolesio in his second final.

Tupou solidified his reputation as possibly the most damaging weapon in the world at scrum-time with a completely dominant showing.

There was a great shot at half-time of three Reds staff members giving Tupou a rub down in the sheds. It certainly sums up his importance. And there he was in the 86th minute, still giving it his all.

The Reds thought Feao Fotuaika had scored from short range. Referee Nic Berry couldn’t hear his TMO due to a vociferous Brisbane crowd, yet came to the conclusion the ball was above a boot at first put-down.

The visitors were content building scoreboard pressure through Lolesio penalties, while the Reds were being blinded by the bright lights of a final.

Harry Wilson’s exit after 44 minutes, due to a head knock, was a significant blow and overall, the Brumbies’ back row certainly got bragging rights.

The Canterbury Crusaders had to fight hard to overcome a courageous Waikato Chiefs side 24-13 in a thrilling final and retain the Super Rugby Aotearoa title at their Christchurch Stadium fortress on Saturday.

Winger Sevu Reece and fullback Will Jordan scored tries in the first 16 minutes but thereafter the Crusaders – reduced to 13 men in the second half with two men in the sin bin – had to rely on the boot of Richie Mo’unga to keep the Chiefs at bay. 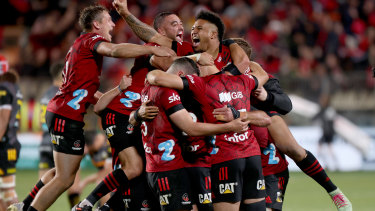 George Bridge, Bryn Hall and Leicester Fainga’anuku of the Crusaders celebrate after the final whistle.Credit:Getty

Despite the odds being stacked against them, the Chiefs played a full part in an exhibition of the best of New Zealand rugby played out in front of a packed house.

“We did our absolute best, we threw everything at them, we just weren’t good enough tonight,” said Chiefs captain Brad Weber.

“The Crusaders were incredibly clinical, even with guys in the bin.”

Damian McKenzie scored all their points with a converted try and two penalties but the fullback will rue his usual accuracy from the tee deserting him for a period around half-time when he missed three shots at goal.

A long Mo’unga pass gave Reece just enough room to score his fifth try of the season in the seventh minute and Jordan chased down a David Havili grubber for the second.

McKenzie slotted his first penalty between those scores and in the 20th minute had an impact with ball in hand.

The Chiefs called a 13-man lineout at the Crusaders’ line and, in the ensuing chaos, centre Alex Nankivell broke away and fired an outrageous offload to set his fullback free for a dash to the corner.

Mo’unga kicked a penalty to give the hosts a 15-10 lead and that was the end of the scoring until well into the second half. 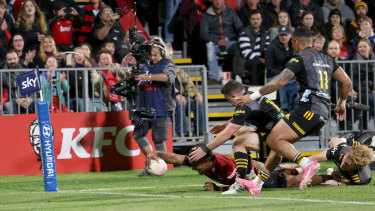 Sevu Reece reaches out to give the Crusaders the advantage at Orangetheory Stadium.Credit:Getty

McKenzie finally found his range just before the hour mark and the Chiefs sniffed a chance with Crusaders hooker Codie Taylor and Reece in the sin bin for dangerous tackles.

The Crusaders muscled up, however, and Mo’unga showed the game management skills that earned him the All Blacks No.10 shirt to carry them home.