Just seven days after a win against the Springboks saw the Wallabies rise to No. 3 in the World Rugby rankings for the first time since 2018, Dave Rennie’s side has the chance to carve out some more history.

If the Wallabies beat Argentina at Townsville’s Queensland Country Bank Stadium on Saturday, it will be the first time they have won three consecutive Rugby Championship games since 2015 and just the second time they have achieved that feat since 2000.

It will also be the first three-game Wallabies win streak since 2017, when wins against Argentina in Mendoza and the All Blacks in Brisbane were followed by spring tour successes against Japan and Wales.

But the Cheika team which did manage to beat the All Blacks, Springboks and Pumas before beginning their 2015 World Cup campaign did turn out to be the best Wallabies side of the past decade.

At that World Cup, the Wallabies won six consecutive matches before falling to New Zealand in the final. 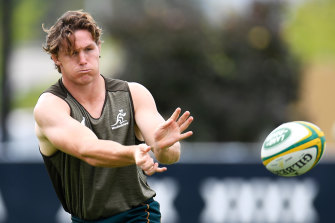 Wallabies skipper Michael Hooper at Friday’s captain’s run ahead of the Rugby Championship showdown with Argentina in Townsville.Credit:Getty

Inconsistency has been the team’s achilles heel in the six years since. While captain Michael Hooper couldn’t quite put his finger on why that has been the case, he did give a subtle nod to the team’s desire to break the habit.

“It’s a good question. We haven’t thought about that too much. Because that’s years gone by,” Hooper replied when asked why the Wallabies struggle to string consecutive wins together.

“What we have spoken about is stuff we can control and that’s staying in each day, growing what Wallabies rugby can look like, the way we want to play.

“That’s what we’re hanging our hat on – changing what that history looks like.

“We’re not looking too far in the past or anything like that. And I think that’s a good way to be.”

Hooper said his teammates’ phones were ‘blowing up’ after their second win against the Springboks.

To ensure complacency does not creep in, the Wallabies captain has reminded his team that their were far fewer messages to respond to after three consecutive defeats against the All Blacks.

“And we can’t forget that,” Hooper explained.

“Certainly, confidence is higher. And belief in our game plan and what we’re trying to execute is greater, as well.”

“Balancing it, we apply expectations of what we want to do. And where we think we can get to. And that’s the most important thing, for us.

“We have to look at ourselves in the mirror, look at the game we want to play and try better each day and each game.

“We’ve had two decent games but we want to continue that. We don’t want to go back and not perform how we want to perform.

“Certainly, confidence is higher. And belief in our game plan and what we’re trying to execute is greater, as well.

“The pitfalls of that are not sticking to that and moving away from a game plan that we’re trying to develop. That’s been the focus of this week.”