The barrackers’ roar is what Richmond’s Jayden Short has missed hearing at the MCG for nearly a year and a half.

And the posts that can set off that ferocious energy with one accurate kick are now in sight for the dual premiership winner’s team, after the goals were positioned at the ground on Monday. 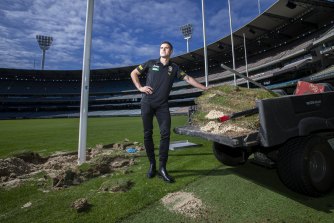 Richmond dual premiership player Jayden Short at the MCG as the ground is prepared for this Thursday night’s season opener with Carlton. Credit:Wayne Taylor

“When there’s no one here it can feel like a bit of a training session,” Short said, standing in the empty stadium.

“But when there is a crowd it gives us that motivation to win and go that little bit harder.”

Coronavirus restrictions will allow a half-capacity crowd of 50,000 at the MCG when reigning premier Richmond takes on Carlton on Thursday night to kick off the 2021 men’s season.

Only a few of the 11,517 tickets for Melbourne Cricket Club members remain after going on sale on Monday. 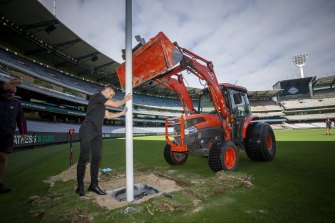 “Obviously we want to have a full crowd,” he said.

“It means a little bit to get back to the homeland of footy at the MCG and have our Richmond faithful back.”

A grounds crew has wasted no time transforming the turf ahead of round one after the Sheffield Shield cricket series was played at the MCG just a week ago.

“This is the first step in the process,” MCG executive manager of turf Michael Salvatore said of putting the posts up. “You can’t line mark until the goal posts are in.”

The goal posts are new this year and the former posts are now in Santa Teresa – an Indigenous community in the Northern Territory – as part of project to transform the grounds near Alice Springs.

A hinge system that anchors the 80 to 100 kilogram posts in place at the MCG is the most up-to-date in the country, Mr Salvatore said, and tractors gently nudged the posts on Monday to test for impact.

“It feels great to be part of it. It will be good to have some crowds back at the ’G,” he said.

Our Morning Edition newsletter is a curated guide to the most important and interesting stories, analysis and insights. Sign up here.