Essendon are adamant Andrew McGrath will be available for the start of next pre-season after the young midfielder was ruled out for the remainder of the season with an ankle injury.

McGrath, 22, may need surgery on what the Bombers are calling a "lower-level syndesmosis" injury suffered during the Dons’ loss to West Coast at the Gabba on Tuesday night. 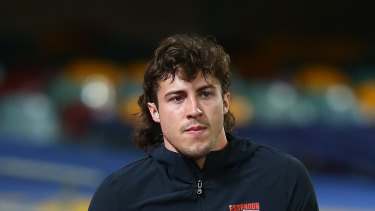 The No. 1 draft pick of 2016 has become an important player for Essendon in his four years at the club. Bombers football department chief Dan Richardson told SEN on Wednesday that a decision on whether surgery is necessary had yet to be made, but that McGrath would be back for the start of pre-season training, which industry sources expect won't be until the new year. The AFL calendar for 2021 is yet to be revealed.

“It looks like a lower-level syndesmosis injury, which seems to have been, for one reason or another, a pretty common injury across the league this year, particularly with us. So we’re not sure yet whether it will require surgery, we’re waiting on some opinions on that. Hopefully he’ll escape without having to have surgery, but it’s likely to mean the rest of the season, but the positive is he’ll be right to go for the start of next season," Richardson said.

“Andy’s had a terrific season, becoming a terrific young player for us, [it's] a disappointment from the night."

The defeat further dented Essendon's already slim finals hopes, with the Bombers sitting half a game outside the top eight having played one more match than eighth-placed Melbourne. The Western Bulldogs and Greater Western Sydney are also outside the eight but better positioned to pounce than the Dons.

"The game overall was a reasonable game for us, I think we saw a lot of glimpses, a lot of patches of the style of footy that we want to be playing. In the end, probably execution in front of goal was probably the main difference on the night between the two teams."

Richardson also defended Joe Daniher after the spearhead's notoriously wayward goalkicking let the Bombers down against the Eagles.

“Second game in after a long time out, I don’t think we should be too critical or too harsh on the goalkicking performance last night. Clearly it’s a part of Joe’s game that he’s worked on over the years and he’ll continue to work hard on. No one’s perfect."