The high-flying Penrith Panthers could be denied home ground advantage in week one of the finals series as the NRL considers changing the rules to maximise ticket sales in financially uncertain times.

Finals footy returned to suburban grounds for the first time in almost a decade last year, with relevant clubs given the options on where they host week one finals instead of following NRL directive as they had in previous years. 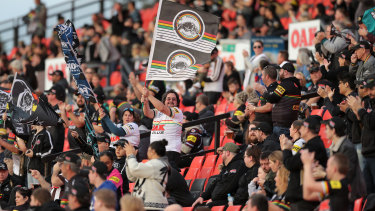 Penrith fans celebrating their team’s success at Panthers Stadium earlier in the year.Credit:Getty

However the financial impact of the COVID-19 pandemic could see the NRL, which has begun discussions with the NSW government to allow 50,000 fans into ANZ Stadium for the grand final on October 25, reconsider its position for week one of the finals as thousands of fans face the prospect of being locked out of venues.

The ARL Commission will next week be presented a range of options for the finals series, but a decision may not be reached until closer to the playoffs as the game awaits the potential relaxing of NSW government restrictions that currently limit stadiums to 25 per cent capacity or a maximum of 10,000.

The Melbourne Storm are expected to have to move their home final from Sunshine Coast Stadium to Suncorp Stadium where they'll be able to accommodate a crowd of 25,000, while the Parramatta Eels may also be asked to move from Bankwest Stadium to ANZ Stadium if the NRL wants to add an additional 3000 spectators. The Eels would be strongly opposed to such a measure.

The Panthers are the most likely to be impacted given a maximum of 4000 fans are allowed into their stadium in Penrith, but the club has no desire to move the match to Bankwest Stadium (7000 capacity) or ANZ Stadium (10,000). 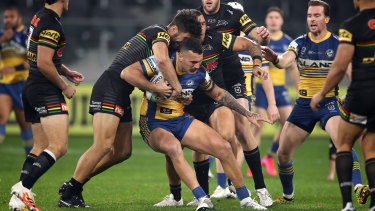 The Eels and Panthers could square off in week one of the finals.Credit:Getty

There is a possibility they may face-off against western Sydney rivals Parramatta in week one of the finals, making the move to Bankwest Stadium even less attractive.

"We've been fighting for the last decade to get a semi-final at home," Panthers group chief executive Brian Fletcher told the Herald. "We finally get permission last year and there's no way now we'd be handing that up, unless you could have 50,000 at ANZ. We wouldn't move it to have 10,000 at ANZ. We'd just play it at Panthers.

"You strive all season to get that home final and finish as high up as you can on the ladder to get that advantage, so if we get the chance to play a home final we know where we want to play it."

Teams that finish first, second, fifth and sixth are entitled to home games in week one of the finals. Before the rule change last year, the last time a final was played at a suburban venue was in 2010, with the Panthers and Dragons earning the right to play at Penrith and Kogarah respectively.

There is expected to be a huge demand for limited finals tickets in 2020, which could see the NRL charge a premium for the right to attend matches in this year's series. The NRL will be reluctant to lock in venues until the 11th hour in the hope the rate of infection decreases enough to convince the government to ease restrictions and increase capacity at NSW stadiums.