Penrith remain confident superstar halfback Nathan Cleary will be fit for the start of their title defence as he undergoes shoulder surgery in Brisbane next Wednesday.

Cleary has been booked to see orthopedic surgeon Tony O’Neill who will repair his labrum – cartilage that rims the shoulder’s socket – and re-attach the supraspinatus tendon at the back of the shoulder, which was also suffered a tear of more than 50 per cent.

Recovery time from a shoulder reconstruction is normally up to six months, but club sources with knowledge of Cleary’s injury told the Herald on Friday they were optimistic he would be back in four-and-a-half months, which coincides with round one.

It had been reported that Cleary was set to miss the opening month of the 2022 season. If the club feels Cleary needs longer they will not rush his return for the sake of being right for the first game, but he has proven to them in the past how diligent he is when it comes to rehabilitating injuries.

Cleary dislocated his shoulder during Origin II and played on bravely for 70 minutes with his right arm dangling by his side.

He was able to return for Penrith six weeks later and finish the season, but was given a series of scares at training and in games, including the qualifying final against Souths and again in the preliminary final late in the game against Melbourne when he reeled out of an attempted tackle on Kenny Bromwich. 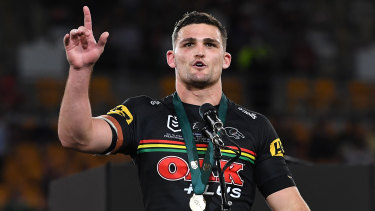 Cleary did not require any painkillers during the grand final triumph over Souths when his kicking game proved the major difference, earning him the Clive Churchill Medal.

The shoulder, remarkably, did not deteriorate after Origin, with the supraspinatus tendon remaining intact, and the labrum dimensions “not going any further around the clock face”, which is the terminology commonly used by medical professionals.

“It was gnarly to start with, so the shoulder could not have got much worse,” one club source told the Herald.

The No.7 will remain in a sling for six weeks and undergo physiotherapy. The countdown to Christmas will feature some light gym work and strengthening using an exercise band. He will also be able to start running to build up his aerobic fitness.

Penrith will then aim to see Cleary start skills sessions on the field with the team in the new year. The fourth and fifth month of recovery will focus on strengthening the shoulder that will inevitably be targeted by rivals for the remainder of his career.

Matt Burton would have slotted into the halves with Jarome Luai during Cleary’s absence, but he is off to Canterbury.

Fullback Dylan Edwards underwent scans in Queensland on Friday on his fractured metatarsal, which he played with for the final weeks of the season. It emerged after the premiership win he had not been able to train most weeks because of the foot fracture.

But Edwards is likely to avoid surgery with the off-season giving the injury time to heal.

Winger Brian To’o (ankle), Moses Leota (calf) and James Fisher-Harris (knee) will also avoid having to go under the knife.

Meanwhile, the NRL confirmed on Friday they had asked Penrith for a “please explain” after photos of a broken Provan Summons Trophy emerged on social media during the week.

The premiership trophy was knocked off a table during the marathon party in Queensland, but the NRL told the club they were unimpressed pieces of the iconic prize had since been photographed, including a bronzed Norm Provan and Arthur Summons being seated in a pram, which was posted by one of the player’s partners.

Good as Gould: Young Swan closing in on debut as Rampe ruled out