Check back in for updates through the day

Parish ruled out of Spud’s Game

Essendon midfielder Darcy Parish has been ruled out of Friday night’s Spud’s Game against St Kilda because of a calf injury.

Parish was hurt in last week’s loss to Carlton when he took a knock at the opening centre bounce. He battled on but was subbed off in the third term, having had only 10 disposals. 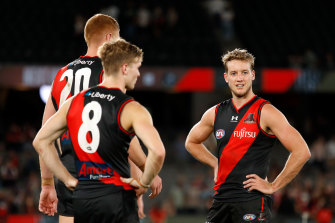 It’s been a frustrating year for Darcy Parish, this exacerbated by a corked calf ruling him out of Friday night’s Spud’s Game.Credit:AFL Photos

He had said through the week he was on the mend but coach Ben Rutten confirmed on Thursday that Parish will miss the Friday night clash at Marvel Stadium.

However, defender Andrew McGrath, who missed the Blues’ clash with a calf problem, returns.

Frawley, the former Saints’ captain, Richmond coach, media commentator and AFL figure, died when his car struck a tree outside Ballarat in 2019. A much-loved character who had time for everyone, his legacy has increasingly centred on his mental health battles and an unflinching willingness to disclose them.

A postmortem examination found Frawley had “low-stage” CTE — chronic traumatic encephalopathy — which was linked to repeated head trauma through his football career.

Dale the latest Bulldog to recommit

The Western Bulldogs may have had a bumpy start to the season but their re-signing process has largely been smooth, with All-Australian defender Bailey Dale the latest to extend his commitment to the club. 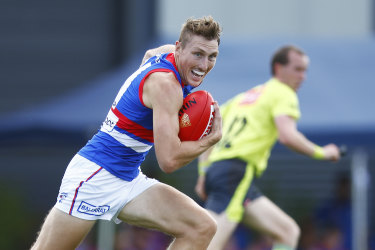 Carry on: Western Bulldog Bailey Dale has snubbed free agency and re-signed with the club.Credit:Getty Images

Dale, 25, confirmed on Thursday that he had signed a five-year contract extension, tying the free agent to the club at least until the end of 2027.

“I am really excited to keep playing for this amazing club for the next five seasons. I am grateful for the opportunity the club has given me and was always keen to commit long-term at Whitten Oval,” Dale said.

“The direction the club is heading is exciting and I’m keen to be a part of that, particularly playing and working alongside a great group of players and staff. I’m pleased that the contract is finalised and can now turn my focus to continuing to help us build on-field for the remainder of the season.”

Dale’s re-signing follows that of rebounding half-back Caleb Daniel, while ruckman Tim English is keen to extend his deal. However, the Dogs still have to work through an extension for Bailey Smith, who is awaiting his fate from league brass after admitting he took illicit drugs, while Josh Dunkley, enjoying a career-best season, is another for the list.

Bulldogs’ general manager of list and recruiting Sam Power said the club was delighted to have retained the 97-game veteran.

“We are thrilled to keep Bailey for the next five years. After starting his career forward, Bailey has transformed into a reliable rebounding defender that provides plenty of dash and excitement in our back half,” Power said.

“It was pleasing to see Bailey’s hard work rewarded at the end of last season, receiving his first All-Australian jacket in his first season as a defender. Bailey is a popular teammate and talented individual that continues to have a profound impact on our playing group.

“His long-term commitment to the Bulldogs is a great reflection of the confidence he has in the playing group and the direction we’re heading in as a club.”

Hannebery still sidelined but Saints hopeful of round one berth