Penrith returned to their home ground for the first time as premiers.

They were greeted by adoring fans, although the welcome from their cross-town rivals wasn’t as warm. It is only February, but this is an early indication of just how much the chasing pack will lift in search for their scalp. When the hooter sounded, they conceded 36 points without scoring one.

Of course, context is required during these barrier trials. Only eight members of the team that did the job on grand final night were selected for Penrith. Ivan Cleary added Jarome Luai, Stephen Crichton, Api Koroisau, Brian To’o, Viliame Kikau, Moses Leota, Spencer Leniu and Scott Sorensen to the side that beat Cronulla last week, but the rest of the big guns are expected to be on deck when the real stuff begins against Manly.

Brad Arthur had almost all of his finest troops at his disposal. When they were all on the field, for the first three-quarters of the game, the blue and golds dominated. Only when the score ballooned to 30-0 were they given a spell.

The most impressive aspect of their play was the connection of their halves and how seamlessly they gelled with teammates.

Mitchell Moses kicked often and well. There was a 40-20 and an assortment of kicks that landed in or near the opposition in-goal. Dylan Brown, meanwhile, found his running game. The five-eighth was solid in defence last year and now, having recommitted to the club, wants to be more involved with football in hand. He scored a try and started the second half at left centre in a move that allowed Jake Arthur some game time. 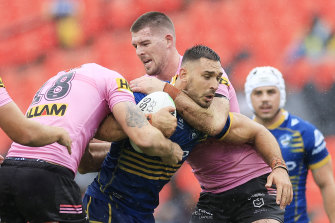 Ryan Matterson is tackled in the trial clash with the Panthers.Credit:Getty

Parramatta’s opening try was the sort that makes you gasp when performed on a dry track. That they did it in greasy conditions made it more spectacular still. Isaiah Papali’i finished off a movement that included a scything run from Clint Gutherson, the pinpoint boot of young gun Will Penisini and a clever inside ball from Reed Mahoney.

The biggest worry for Parramatta coming into their campaign is their depth on the flanks. Blake Ferguson is gone, Maika Sivo will miss at least a third of the season and Haze Dunster won’t be sighted after becoming the victim of a Tyrell Fuimaono hip drop. The dramas have provided an opportunity for Sean Russell. The teenager, who had two opportunities in the top grade last year, finished off some neat work from his inside men with one of those classic wingers’ efforts on the left edge.

During Parramatta’s season launch, Arthur revealed he gave Junior Paulo the co-captaincy in the belief the responsibility would help him fulfil his ambition of becoming the best prop in the world. The very early signs are promising. Paulo was imposing while the rest of the Eels engine room worked in tandem – the visitors finished with 13 offloads – with and without the ball. Big bopper Makahesi Makatoa even bagged two tries for his trouble.

The only concern for Arthur is the reporting of Bryce Cartwright, who was sin-binned for a shoulder charge.

It was a tough outing for the Chocolate Soldiers, but there is no cause for alarm. Their completion rates were reasonable, but they simply had too little of the football, which made it hard to get much of a gauge on fill-in half Sean O’Sullivan and a slew of other fringies.

‘I will stick up for my teammates’: United star opens up on Creek brawl