Players have left Melbourne Storm for far less than what Kenny Bromwich endured.

The Storm back-rower and respected leader will bring up his 200th NRL game on Sunday when his club takes on St George Illawarra Dragons at AAMI Park. 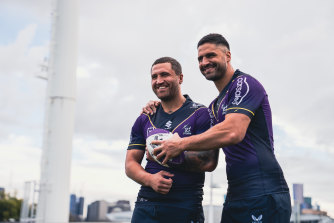 Melbourne Storm forward Kenny Bromwich (left) plays his 200th game on Sunday joining his brother Jesse Bromwich. The pair will become the second brothers to both play 200 games at one NRL club.Credit:Melbourne Storm

He and brother Jesse will become the second brothers to both play 200 games for an NRL club following Matt and Kurt Gidley at Newcastle Knights.

For the last four years, he has been a starting player on one of the most potent left-edge attacks in the NRL, where the likes of Cameron Munster, Josh Addo-Carr (now at Canterbury) and Justin Olam have posted try after try while Bromwich has been their link-man and poised leader.

“I’ve just tried to do my best so Craig [Bellamy] would pick me the week after as that didn’t always happen for me when I was coming through,” Kenny said this week.

“I never thought I would see some of the stuff that I’ve done. It’s been a crazy ride and I’m looking to add some more things to club history while I’m here.”

Early in his career, Bromwich lacked both the role and the consistency to hold his place in the Storm’s side, spending parts of his first three seasons in the Queensland Cup, including the first nine games of 2015. But he kept working and won back a spot as a bench utility playing across the forward pack.

Bromwich didn’t win a regular starting role until 2019 when a spot on the left edge opened up, which has seen him become a regular New Zealand Test player, a premiership winner and one of the Storm’s most consistent performers.

“A lot of people don’t know that at the start of his career he played a lot of Queensland Cup,” Jesse Bromwich said this week.

“So it’s been a bit of a crazy journey from being a ruck forward early in his career and then coming off the bench for us and doing a pretty good job. When that spot on the left edge opened up, he really made it his own.”

The pair have been roommates for their whole Storm careers and were teammates together with Brisbane Easts, known as Brisbane Tigers, in the Queensland Cup before Kaufusi became a regular Storm starter.

They enjoy playing card games like 500 and Euchre while talking about their young families and footy.

“It’s huge what he has done,” Kaufusi told The Age and Sydney Morning Herald.

“If you go back over his career he has been on the fringe, he was in, he was out and he would have been 18th man [first reserve] heaps of times or been sent back to Q Cup.

“I played with him at Brissy Easts heaps of times. There is a photo I have of me, him, Cody Walker and Hymel Hunt playing for them back in the day and look at him now.

“He’s just kept working hard and didn’t give up. He always had that belief and now he’s such an important part of our team. It’s all on the back of that tough work and not giving up.”

Bromwich is only the eighth player to play 200 Storm games and his impact on and off the field will be missed when he joins Jesse and Kaufusi at expansion club The Dolphins next season.

Prop Nelson Asofa-Solomona will also play his 150th game on Sunday and Bromwich said this week he was happy he could share his milestone with someone else.

Kaufusi admits he didn’t see his good mate as a natural back-rower until Bromwich showed what he could do alongside Munster and co, and he has continued to build his connection with that group including new winger Nick Meaney this season.

But Kaufusi thinks his mate’s most valuable contribution is as a leader behind the scenes.

“I don’t think people realise how much of an impact he has on the team, especially on his edge,” Kaufusi said.

“He has that calming influence. He is one of those leaders that when he talks, people listen.

“In the past few years we have lost so much experience as people like Cameron Smith, Billy Slater and Cooper Cronk left the club, but he has really stepped up.

“On the field, he has been underrated. He has added a lot to his game, he can run, he can pass, he can kick, and he has been building those combinations for a few years now.”