Collingwood president Mark Korda is encouraging members to wait until the next annual general meeting to have their say on how the club’s board should look going forward.

His comments come after 40-year Magpies member David Hatley began taking signatures outside the MCG on Sunday, seeking to spill the Collingwood board via an extraordinary meeting. 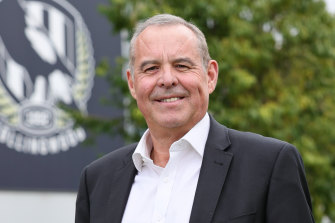 Hatley told The Age he was confident he would attract the 650 signatures required to force an EGM but was yet to decide how quickly he would call for the EGM.

Korda told ABC Grandstand radio on Sunday that he was hopeful Hatley would wait until the end of the season.

“Coups aren’t in the best interest of any football club,” Korda said.

“He said he’s not going to call for an EGM straight away but that’s David’s perogative. I said to him, our preferred position is three of the directors – that’s nearly 50 per cent of the board – are up for re-election at the AGM at the end of the season, I said I think that’s a good time to deal with those matters.”

Hatley said he wanted to give Collingwood members a say. Along with the at-ground petition, Hatley has also set up an online petition at Magpievoice.com, calling for the EGM that would seek to vacate all board positions.

“There have been well-documented issues since November with the trade period, the Do Better report, how everything finished up with Eddie, the recent board appointment [of Dr Bridie O’Donnell], but importantly, it’s not just about the on-field performance at the moment,” he said.

“There have been a lot of members unhappy with aspects of the club for four or five years and that’s including the year we made the grand final. 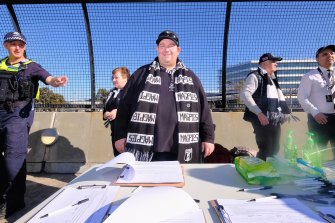 But Korda said it was important Magpies members understood only the club’s board of directors could choose who would be president.

“Jeffrey can’t walk into the club and say ‘I want to be president’. That is the board of directors’ decision and no one else’s,” Korda said.

“I’m only there because the board members elected me and they can change their mind at any board meeting.”

Following a meeting with Hatley and other club members, Korda said he was confident their issues could be addressed without the need for a mid-season spill.

“I think broadly David’s view is members feel not as connected as they should be with the club, and I think that’s happening at all clubs at the moment particularly because of COVID-19,” he said.

“I said we will form a sub-committee on the board to take on board directly what the members want and need from the club going forward.

“I think membership are doing a very good job but I think we can do better and listen better.”