Collingwood have finalised their AFLW list for 2021 by announcing the re-signing of two of their best players, Sharni Layton and Britt Bonnici. 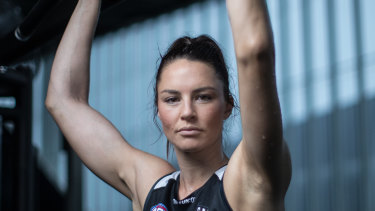 The Pies also on Monday announced they had kept their two Irish recruits Sarah Rowe and Aishling Sheridan.

Bonnici is one of the competition’s premier midfielders while Layton’s ruckwork and impact improved out of sight in 2020, having previously played netball for Australia.

Bonnici won the Pies best finals player award and was runner up in the club’s best and fairest, while Layton earned All-Australian selection and Collingwood’s Player’s Player gong.

All have signed a one year contract extension and it means nine of the club’s best and fairest top 10 will return in 2021.

Meanwhile Kaila Bentvelzen has stepped away from footy to focus on her health.

Collingwood general manager of women’s sport Jane Woodlands-Thompson thanked Bentvelzen for her contribution to the club, and praised those re-signing.

“On the last day of the trade and sign period we are delighted to retain a further four quality individuals for our 2021 program,” Woodlands-Thompson said.

“As a program we have come a long way since our inception. To have a solid list of 24 athletes locked in for next year is a tribute to what we are creating here at the Holden Centre.

“The club thanks Kaila for her commitment to the Pies for the 2020 season.

“We wish her all the best for her recovery and hope to one day see her return to the game in the future.”

The truth about Darius Boyd’s fall from grace