AFLW fixture changes are not a concern for Collingwood coach Steve Symonds, although the Pies are wary of a wounded Geelong side heading into their clash on Saturday.

Collingwood were set to play Gold Coast in round two but border restrictions and the Western Australian lockdown forced a redraw of the plans, with teams finding out their fixtures had changed on Thursday afternoon.

Symonds said he and his coaching staff had to be nimble, but that it was not a worry given how plans continue to change amid the pandemic. 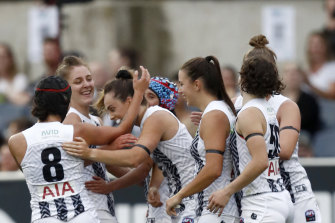 Aishling Sheridan and her Collingwood teammates celebrate a goal during round one. Credit:Getty Images

“It hasn’t changed [preparations] too much,” Symonds said. “We prepared heavily for Gold Coast and selected the team based around that.

“We adjusted and spent a bit of time in the afternoon on what Geelong are doing and look at them, we have our mind set on that. Game time and venue doesn’t affect us.

“The old saying is taking it week by week but we are taking it day by day at the moment. It’s about what’s in front of you. Pleasing thing is we get the opportunity to play, our girls are so keen to play.

Despite copping a comprehensive smacking by North Melbourne, in round one in a match that at times resembled a training run, Symonds is not taking the Cats challenge lightly.

“Definitely wary [of Geelong on the rebound]. They’re actually not a bad side, the Cats,” he said.

“What they showed in their trial game they’ve got quite a bit of talent so we’re very cautious about them.”

He said momentum swings were a trend of round one.

“I think there was a bit of a trend in most of the games. First quarters are always a bit tight. I think most teams put pretty high pressure early on … they’ll be tight then teams start to get a bit of fluency going and break the game open a little bit,” he said.

SIR CLIVE WOODWARD: Henry Slade will shine as a playmaker for England