Four-time Hawthorn premiership great John Platten concedes concussion can never be eradicated from the AFL, but says the league has made significant progress in its protocols.

Platten, having dealt with several serious head knocks in his Hall of Fame career, hopes there can be a “happy medium” in terms of concussion rates, although he admits the numbers accrued so far this season by an independent review are a worry. 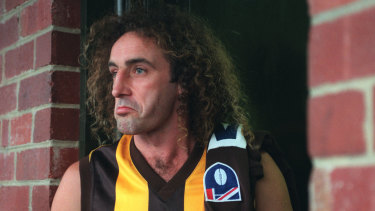 Jess, a long-time advocate for concussion awareness, and his team have tallied 17 AFL-listed players through the pre-season, including an ongoing three-month battle by Adelaide Crow Paul Seedsman, while St Kilda forward Jack Higgins was on Sunday added to the seven through the season proper so far.

“It is (a concern), but the game has changed (for the better),” Platten said. “There has to be a happy medium come into the game. They have taken away the head-high tackles, the front-on tackles, but, at the end of the day, you are never going to stop concussion because of the way they fall on to the ground and their head bangs on the ground.

“We are trying to minimise the concussions. Instead of having 100 like last year, we might have 90, 80, 70. If we can avoid that, that would be fantastic.”

Platten, a Brownlow medallist and Magarey Medal winner, said the manner in which concussion is now treated by clubs is significantly different to his time in the 1980s and ’90s, when players were tested by the doctor’s moving finger in front of the player’s eyes and had to pass a few memory-based questions.

“Don’t get me wrong, it’s a contact sport, and you are going to get hit from 360-degrees, and you don’t know when it’s going to come,” Platten said.
An example of that was the controversial clash between Willie Rioli and Matt Rowell in round one.

“To the credit of the AFL, especially over the last five or six years, they have brought in a concussion test where you have to come off the ground and get properly tested and, if there are signs of concussion, there is no chance of you coming back on the ground,” Platten added.

“That’s the best part of what has happened over the five, six years, and last year they brought in a 12-day break, which is good. Some people say it could be longer but it’s up to the player to see where they are up with it all, with the symptoms after the 12 days.” 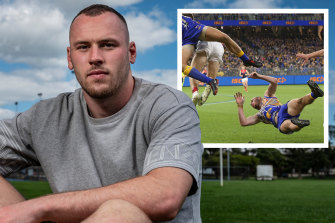 Jess, also a player manager who has questioned the league about its handling of serious head knocks for more than a decade, said the prospect of another year of more than 100 concussions was a “major concern”.

“It’s shaping up as at least another 100 concussions. The AFL says we are about safety first – but we need to work out how we can make it safer,” Jess said.

“If there are more than 100 who potentially have brain damage, how can that be safe? The AFL says surely players accept that if they play in the AFL, there is a chance they get concussion. But what they are not told is about the potential long-term damage. Does the standard contract contain a waiver after long-term damage? No, it doesn’t. The AFL owes a mitigation to limit that damage.

“Players in all collision-based sports have some knowledge of the likelihood of concussions, but the extent of the true damage caused has not been fully explained.”

Jess said scanning, not baseline cognitive testing, was the most accurate way of testing for brain damage from one season to the next.

The AFL has strengthened its protocols in recent years, this in part highlighted by Jordan De Goey being cited – and offered a one-match ban – for a dangerous sling tackle on Patrick Dangerfield on Saturday night.

The AFL’s chief medical officer Dr Michael Makdissi has spoken with players about the potential dangers of chronic traumatic encephalopathy (CTE), a degenerative brain disease, should they have repeated head knocks.

Jess and his team last season tallied their own club-based AFL figures and found there were 76 concussions across the home-and-away season and two during the finals, although those figures included 15 injuries that were not officially recorded as concussions but were to the face or neck, such as facial fractures or neck/jaw injuries.

Even if those injuries were subtracted, last year’s figures were well up on the 42 of 2020, the number officially recorded in the AFL’s annual injury report.

However, when overall figures including training, second-tier competitions and the pre-season were included, there were more than 100. This included facial fractures and eye, neck and jaw injuries.

A handful of players last year retired, at least in part because of serious head knocks, including West Coast Eagles Brad Sheppard and Daniel Venables, and Collingwood’s Levi Greenwood. Venables, told by an AFL medical panel he should avoid contact sport, and his father Peter are fighting for an appropriate compensation pay-out from the league.