Home » Rugby » Portrait of a champion: Addo-Carr to add ink of beloved grandfather

No matter the result of Sunday's NRL grand final against Penrith, Josh Addo-Carr will add a tattoo to his skin over the off-season. It will be a portrait of his late grandfather Wally Carr, who has rarely been far away from the Storm winger's thoughts this season.

"I think him about him every day… every day. I was thinking about him last night, just wishing he could spend another moment like this with me," said Addo-Carr, who idolised his beloved 'Pop', an Australian boxing warrior who would succumb to stomach cancer in April. 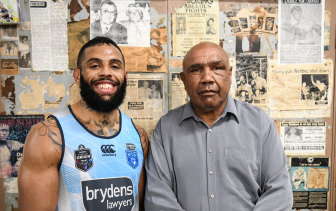 Josh Addo-Carr with his late grandfather Wally Carr during the 2018 Origin series.

"He came to the 2017 grand final. He freaked out how loud it was… he had to leave the game early, it was just too much for him," Addo-Carr said. "But I did share that special moment in 2017 with him and I obviously miss him very much."

Wally would always champion Addo-Carr's cause and in 2018, urged NSW coach Brad Fittler to take a chance on the speedster. It would turn out to be good advice and the coach was paying attention.

"Brad Fittler, he's a gentleman. Brad Fittler loves him. And I think he [Josh] can rise to the occasion," Carr told the Herald at the time.

"People say he gets out of position, that he can't tackle. It's the same as fighting – when the occasion comes, you rise to the challenge. I know he can do it."

Wally Carr was a well-travelled fighter with 100 bouts to his name, finishing his career with a 53-38-9 record. He knocked out 27 opponents and plied his trade everywhere from Papua New Guinea to Fiji, Indonesia and Zambia.

Addo-Carr admits he has never been much of a fighter but he shares his grandfather's competitive blood. Soon, Wally be on on his skin, with another tattoo on the horizon for Addo-Carr on an increasingly crowded canvas.

Addo-Carr will play his final game for the Storm in the grand final but has yet to settle on his future club, with the Bulldogs, Tigers and Rabbitohs all interested in his services.