David Teague’s manager expects his client will be sacked as early as Sunday, and has taken aim at Ross Lyon.

In an escalation of tensions between the Teague camp and Carlton, Liam Pickering went on the attack on Saturday, revealing he had been rebuffed when seeking clarity from the Blues’ executive about Teague’s future. He said the “silence is deafening”, all but confirming Teague will be sacked despite having a year to run on his contract.

“I spoke to Carlton this week [to seek clarity on David Teague’s future] and they didn’t have an answer,” Pickering said on SEN.

“They said we have to wait for a review, apparently they have a meeting on Sunday or Monday and then they’ll make the call. The silence is deafening.”

Pickering, a prominent player agent, also took aim at Ross Lyon and the comments he made confirming his interest in the Blues’ job on Footy Classified on Wednesday night.

Lyon said he had the support of past Carlton players, including Stephen Kernahan, and influential types, with Pickering claiming the former St Kilda and sacked Fremantle coach had already been in discussions with the Blues. 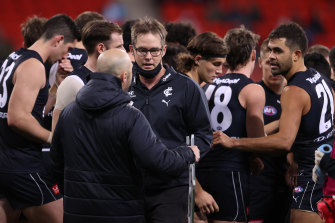 Carlton coach David Teague walks away after talking to his players during the loss to Greater Western Sydney.Credit:Gerty Images

“We have blokes going on television on Wednesday night jockeying for his job. I don’t know what that was from Ross Lyon, it was like a job interview to me. It was pretty grubby,” Pickering said.

“I thought it was a grubby thing, it was a set-up interview. It was pretty poor really.”

Pickering said the Blues should run a thorough a proper coaching “process” if they do away with Teague, pointing out Lyon had bypassed that when he replaced Mark Harvey and was appointed the Dockers’ coach.

“I am 100 per cent [that Ross Lyon has] had dialogue with Carlton already, he was talking very smugly the other night. He didn’t want to be disrespectful to David Teague and then went on a five-minute rant about why he’d be a great man for the job,” Pickering said.

“I get angrier than this stuff than Teague does. I don’t think you treat people the way he’s been treated this year. It’s poor.”

Lyon said he would take a call from the Blues but conceded the job would go to Alastair Clarkson – should he want it. The four-time Hawthorn premiership coach finishes his 17-year stint on Saturday and says he is leaning towards having a year off. However, he said a final call would not be made for another fortnight.

Lyon also declared he is not interested in the Collingwood vacancy, but Magpie insiders have a different spin on this.

A dignified Teague had maintained the party line until Thursday when he admitted he felt let down by Blues’ powerbrokers for failing to back him up publicly while the club completed a wide-ranging external review. He said the Blues had not “nailed” the review process.

That review was tabled by the Blues’ board more than a week ago, but the club has refused to release the findings until after the home-and-away season. The Blues’ final match is against Greater Western Sydney on Saturday night.

New Blues president Luke Sayers is expected to release a summary of the findings within days to the club’s members first in a bid to justify the changes that will be made within the football department, which also has football department chief Brad Lloyd and fitness boss Andrew Russell fighting for their jobs.

The Blues had expected to make the finals this season but recent losses to bottom-placed North Melbourne and a struggling Gold Coast ended that hope. They have a 21-win, 28-loss record under Teague since he replaced Brendon Bolton through the 2019 season. They finished 16th in 2019, although six of their seven wins came under Teague, 11th last year and now sit 13th, with eight wins.

Teague’s biggest on-field issue has been the defensive lapses, where the Blues have too often conceded runs of five or more goals, including 19 straight in a 95-point loss to Port Adelaide last week.

DAN BIGGAR: South Africa will come twice as hard at us next week