Home » Rugby » ‘Proud westies’: Fittler on what Panthers premiership would mean to Penrith

Premiership-winning Panther Brad Fittler knows what a win would mean to the community at the foot of the mountains – and how it would quickly erase the memories of what was ''a pretty shitty year '' in 2019.

As a 19-year-old, Fittler was a star of the 1991 title-winning team that won eight of their final nine regular-season games before beating North Sydney and then Canberra in a famous decider. 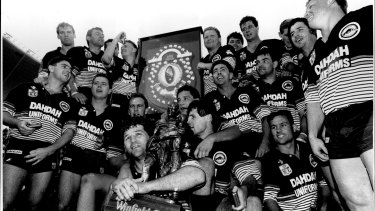 He knows the young Panthers do not have a care in the world and Nathan Cleary in their corner, but they will need to stop Cameron Smith, the ''greatest player – ever''.

Fittler, however, said the drawn-out and intense speculation about Smith's future had become a ''joke'', but it could work in the Storm's favour and take some of the pressure off his young Melbourne teammates.

"Penrith had such a shitty year last year with all sorts of things like behaviour – it shows how behaviour affects your job and what you're supposed to do – but it's the opposite this year,'' Fittler told the Herald on Monday.

"They can teach a lot of people a lot of lessons. They are really humble, they're enjoying it and rising to the challenges.

"I've enjoyed watching them play moreso than [any other team].

"Penrith in 1991 is very different to Penrith now. But it's the same community, the same type of people – they're proud westies, very simple, they don't have much need – but it's a nice place to be.''

The Panthers were rocked by a sex-tape scandal on the eve of last year in what was Ivan Cleary's first season back in charge. Like the community, rugby league's underdogs have climbed off the canvas to book a spot in another grand final chasing what would only be their third title.

Fittler's standout memory of the 1991 decider was some choice words from club legend Royce Simmons.

"We were coming out at half-time and Royce said, 'we're behind, but we can't die out here today, and let's put it all on the line','' Fittler said. 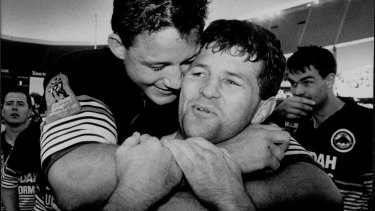 ''Penrith have had it as hard as anyone. It would be a great story.

"Nathan is unflappable at the moment. He's come through, his dad was a player, he's made mistakes, he's played in big games with Origin.

"Everyone is really happy for him and he's such a humble kid.''

Fittler was joined by the first of his NSW Blues players at Sydney Olympic Park on Monday with skipper Boyd Cordner, Tyson Frizell and Jake Trbojevic heading north to their Magenta Shores base on the Central Coast for the next month.

There are only seven spots left, and with Ryan Papenhuyzen, Josh Addo-Carr and Dale Finucane all but certainties to be added from the Storm, Penrith will have just the four involved in the best-of-three series which begins on November 4.

Cleary is the first-choice No. 7 while Api Koroisau, Liam Martin, Stephen Crichton, Moses Leota and Isaah Yeo are all in with a decent shot.

It will look a little different this year, but there is still plenty to look forward to when it comes