Richmond star Tom Lynch says last year’s finals-free September may be a “blessing in disguise”, as a club great declared the Tigers the team to beat ahead of Thursday night’s season opener against Carlton.

Battered and bruised by injuries, fatigue and bubble life last season, the Tigers – premiers in three of the four previous seasons – missed the finals.

However, a healthy Dustin Martin, on-field positional changes, new captains in Dylan Grimes and Toby Nankervis and an overall fresh group physically and mentally has the Punt Rd faithful confident there is still time to extend their premiership era. 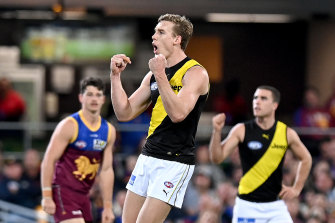 Lynch, who will play a pivotal role up forward, said the Tigers were determined to again contend for a flag.

“I think the last few years took a fair bit out of us. Like everyone, COVID has been pretty tough. We felt like we had been hanging on a bit last year,” Lynch said at the MCG on Monday.

“In a way, we, obviously, would have loved to have played finals last year, but it gave us a way to get away, refresh and come back for pre-season with plenty of energy. I think we have done that. As I said, we want to contend every year and play finals, but it might have been a little blessing in disguise.”

Club great Kevin Bartlett, honoured on Monday to have belatedly been presented with his Hall of Fame commemorative plaque for legend status, added fuel to the Tigers’ cause.

“I think last year there were a lot of injuries and, as a result, not much continuity for the Tigers, but I think if they get all their players back fit and well, [Robbie] Tarrant has been a very good inclusion replacing [David] Astbury, if we stay fit, I think the Tigers are still the side to beat,” Bartlett said.

“Bit of pressure on, thanks for that,” Lynch responded in jest. He added: “Melbourne and the Bulldogs were the teams to beat last year. They were pretty powerful. We have a bit of catching up to do. Obviously, standing here now, you think you have done the work, and you are excited about the season ahead.

“Obviously, Tarrant has come in, and he is going to add a fair bit. Guys like [Ivan] Soldo and Dion [Prestia] didn’t play a lot last year. These guys will get a bit of continuity.”

The Tigers are also determined to maintain their decade-long hold on the Blues but a call on whether Grimes plays has yet to be made.

Grimes, having fractured his left thumb and required surgery last week, remains in a race to be fit.

The decision to shift the strong-marking Noah Balta and speedy Liam Baker from defence to forward has worked a treat through the pre-season, ensuring the Tigers of more options inside attacking 50. Baker will look to ensure the Tigers continue to be one of the best teams at locking the ball inside 50.

“Obviously, we are experimenting a bit at the moment. Noah is, obviously, a very good player. He has a lot of strengths. He is pretty raw. He is going to bring a fair bit to that forward line,” Lynch said.

“We think we can work pretty well.”

The Tigers have won their past 11 matches against the Blues, having not been beaten since the 2013 elimination final when Mick Malthouse coached the Blues. Carlton last prevailed in what has become their customary round one clash in 2012, when Brett Ratten began his last year as coach.

That’s a lifetime ago for many of the current players, but it’s a record they won’t want to relinquish.

“Obviously, every year you think you can contend. This year is no different. We feel we have put the work in, and we are good to go,” Lynch said.

“We have a great test against Carlton, who looked good over the last two practice matches.”