Home » Rugby » Ratten suggests Clarkson should mind his own business

Brett Ratten has queried whether Alastair Clarkson should mind his own business after the Hawthorn coach questioned the sustainability of his former lieutenant's chipping tactics.

St Kilda edged closer to securing their first finals berth in nine years with a 14-point win over the lowly Hawks at Metricon Stadium on Sunday. 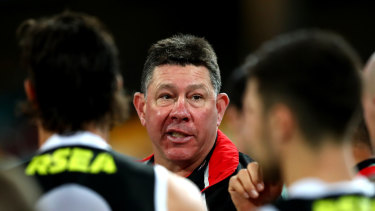 The win pushed the Saints to sixth on the ladder, with one more win – either against West Coast on Thursday night or Greater Western Sydney in round 18 – likely to be enough to book a finals spot in Ratten's first full season as St Kilda's senior coach.

The Saints trailed narrowly at quarter-time after a high-octane opening quarter in which nine goals were kicked, at which point Ratten changed tack, encouraging his side to play a high-possession style of game. St Kilda kicked the only goal of the second term and despite the Hawks' second-half persistence managed to do enough to claim the four points.

Clarkson said Ratten and the Saints deserved praise for their efforts but cast doubts over whether the chipping around would work in the long term.

"They controlled the ball a lot in the second quarter, but it didn't capitalise into scoring opportunities for them, so we were pleased with the effort of our guys, but disappointed that we didn't get a result because we perhaps didn't take some of the opportunities that we had," Clarkson said. 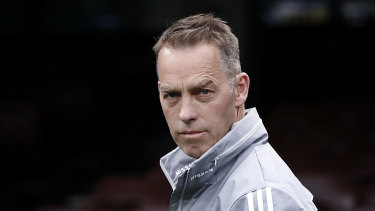 "They were playing an interesting game, a game of keepings off really, especially in the second quarter, I think they took 42 marks and kicked one goal. They might be able to get away with that against us, but I don't think the method itself is going to lend itself to kicking a lot of goals. Where their most damage was caused was when they were able to get out the back. Some was due to St Kilda's good pressure, but some of our handling errors when we were out, we either dropped the ball or that fourth or fifth handball, we just couldn't quite hit the target."

Ratten served as an assistant at Hawthorn underneath Clarkson between 2013 and 2018, a period in which the Hawks won three premierships.

"They would have been concerned at quarter-time that it was five goals to four and the game was played in a ping-pong sort of fashion, so they slowed it down," Clarkson added.

"They win a game of footy. In terms of trying to win big games and score heavily, it'll be interesting to see whether that works in the long run. That's good coaching and good play by them."

Told of Clarkson's comments, Ratten subtly suggested Clarkson worry about his own side, which sits 16th on the ladder.

"That's his comment. We'll focus on what we can do and maybe they could too," Ratten said.

"They gave us the opportunity to move it around and we did, that was something that we wanted to explore, but to that degree, maybe a little bit too far."

Clarkson said young gun James Worpel would miss the rest of the season with an AC joint injury suffered during the third quarter.

Meanwhile Ratten indicated that the Saints would regain Max King (rested) and Tim Membrey (finger surgery) for the date with the Eagles after the tall forwards both missed the Hawthorn game.

"If we could have got the surgery booked in on the Monday, he would have definitely played, and the other part was, on Tuesday we thought it was going to be done about four, five o'clock but it was somewhere around nine, 10 o'clock at night," Ratten said.

"So it just kept getting pushed back hour after hour. Because of the healing and the scars, we just had to be smart about it."

Both Clarkson and Ratten downplayed concerns about the heavily used Metricon turf, praising both the ground's curator and the AFL.