Wallabies great Matt Burke believes Australia will find it difficult to win next year’s Rugby World Cup due to their worst-ever world ranking and inconsistent form that will be tested further in an upcoming two-Test Bledisloe Cup series.

The Wallabies are exactly one year out from their first World Cup match against Georgia, followed by more pool games against Fiji, Wales and a qualifier.

Trying to get an accurate read on how they will perform in France is difficult given their up and down performances.

Since coach Dave Rennie took over in 2020, the Wallabies have won 11 of 27 matches – three were draws – leaving the side at its lowest ebb on the world rankings in eighth spot.

A terrific win over South Africa in Adelaide came undone a week later in Sydney against the same team as the Wallabies again failed to back up an auspicious performance. 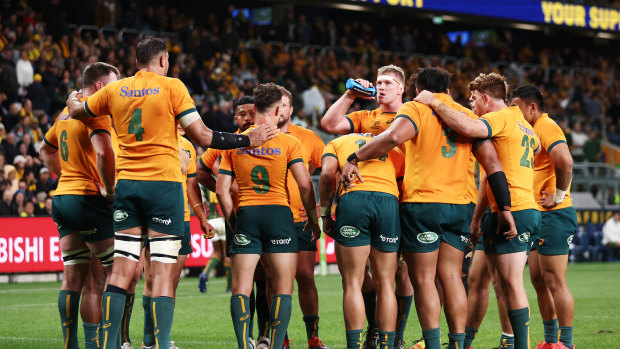 The Wallabies suffered a 24-8 loss to the Springboks in Sydney. Credit:Getty

“I wore the jersey with pride and I hate to see them down that low but it’s a reflection of where they are at the moment,” Burke said. “The hopes get raised and then unfortunately they show their ranking and get belted. It’s the consistency that everyone is after.

“It’s very harsh to say, having been there, but sometimes we have to have a bit of a reality check. Aussies have this incredible perception that we’re going to win everything. That’s the way we’ve been brought up. That’s why we get disappointed when our national team doesn’t do well.

“There’s always pressure on a national coach when you don’t win. Has Rennie done some good things? He has.

“Can they win the World Cup? It would be difficult. You only have to look at the betting markets to see where they stand in the big picture. The World Cup is a special beast … it’s bloody hard.” 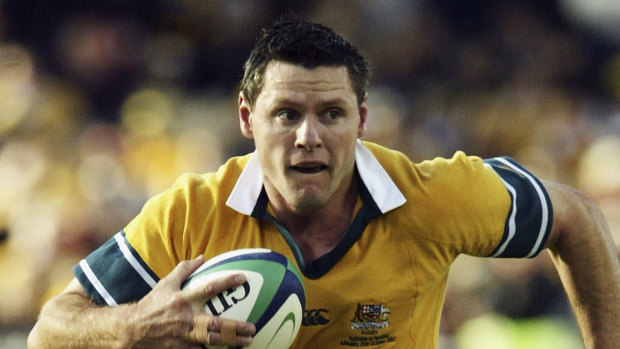 Matt Burke in action for the Wallabies at the 2003 World Cup. Credit:Getty

The Wallabies were finalists at the 2015 World Cup but bombed out in the quarter-finals against England three years ago.

Burke says Rennie must pick and stick, assuming injuries don’t cripple the team, and sort out the team’s No.10 conundrum.

“We need to find and get those combinations sorted for World Cup time,” Burke said. “There has to be a refinement … a culling, an understanding if you’re not good enough to play Test football, you don’t get a start. I’m glad I’m not in that position … because it’s damn tough.

“Who is going to lead us to that role at No.10? We’ve had injuries in that space. That’s the biggest headache.

“No disrespect to [Nic] Whitey and Noah Lolesio but there needs to be a better control of the game [at No.9 and No.10]. I’ve got no solutions to this. I’m not being critical of these blokes, I am just stating the obvious.

“It’s critical to win games. It just gives you confidence leading into that tournament.”

Meanwhile, 71-Test Wallaby Drew Mitchell has labelled World Rugby’s rankings system “laughable” but, like Burke, concedes the Wallabies have work to do in the next 12 months.

Australia have two matches against the All Blacks on September 15 and 24. The team is aiming to win the Bledisloe Cup for the first time since 2002.

“Argentina just got beaten by New Zealand by 50 and we lost to South Africa but Argentina jumped us? I don’t look too much into the rankings,” Mitchell said.

“Sure, we’re not going into the World Cup as favourites, but I think what’s pretty evident is that six to eight teams that could beat each other on any given day.

“We’ve been hampered by injuries but the upside to that is we’ve created a squad of 45 players that have played international footy in the past 18 months.

“Of course there’s issues. You look at Adelaide and then see how far off they were a week later. Some of it is execution, some of it is mindset. It might be a hangover from my era as well. We were probably guilty as well of not backing up a big performance. We need to get to that ruthless mentality.”

With the likes of Bernard Foley and Kurtley Beale coming back into the fold a year out from the World Cup – the latter featured on last year’s spring tour – Mitchell is a fan of experience over youth at major tournaments.

“I absolutely back it,” Mitchell said. “Look at 2011 – we were the youngest team going into that World Cup and most inexperienced. It hurt us.

“World Cups are different. Knockout footy is different. You need that experience. Dave Rennie is doing everything he can to pick an experienced 10. He’s brought Quade back, he’s tried James O’Connor. When experience isn’t available, he’s gone to Noah. Then he’s brought Bernard Foley back.

“I think everything indicates Dave Rennie wants to pick an experienced 10. In some ways, Dave Rennie needs Bernard Foley and Kurtley Beale to fire.”

Watch every match of The Rugby Championship on the Home of Rugby, Stan Sport. All matches streaming ad-free, live and on demand on Stan Sport.

Hunting for a general: Kangaroos in the market for Hodge-style leader