The Wallabies’ record loss to Argentina was one of those Tests that leaves you with a sinking feeling.

We’re one year and three weeks out from the World Cup. Based on what the Wallabies have shown over the past year, they cannot seriously ask us their fans to consider them contenders for the Webb Ellis trophy.

World Cup winners aren’t always obvious at this point. Reigning champs South Africa finished 2018 with a 50 per cent win rate, losing twice to both Wales and England between the then-June and November windows and winning and losing against each of their opponents in the Rugby Championship.

England, South Africa’s opponents in the 2019 final, were on the ropes at the same point. Eddie Jones’ tenure was saved in the dead rubber against the Boks in June 2018. Fifteen months later their march through the 2019 tournament peaked with a 19-7 steamrolling of New Zealand in the semi-finals, emptying their tanks emotionally and physically one game too soon.

So, it is not Australia’s record that gives rise to dread, but the nature of their performances over the past year. Since finishing last year’s Rugby Championship on a four-match winning streak, the Wallabies have not produced a solid, all-round performance.

They were thumped in San Juan. Outdone tactically and outplayed on the basics.

Even after the previous week’s victory in Mendoza, which featured a second-half for the ages, a clear-eyed fan could not say the same performance would have been enough against any of the current top four sides (Ireland, France, South Africa and England).

Enough with the second-half fightbacks. World Cup contenders know how to take a game by the scruff of the neck. Both wins this season – the only two from the past eight Tests – have come despite poor starts.

They’re the good moments. The losses have thrown up the same frailties: accuracy and discipline, or not enough of it for long enough. This weekend’s 48-17 loss exposed another one: Australia’s back three or, specifically, the lack of a genuine fullback. Jordan Petaia, Marika Koroibete and Tom Wright are all good athletes and good footballers but none of them could offer a safe pair of hands under Argentina’s aerial assault. It is terrifying to ponder what the Springboks might do to the same three players in Adelaide in two weeks’ time.

Australia’s forward pack is capable of battering opposition teams and Rob Valetini’s running lines off set piece were one of the few bright spots in Sunday’s loss. But the pack hasn’t nailed the brief with any regularity. In fact, the only reliable things about the Wallabies at all this season is that they’ll trail at halftime.

Perhaps that is to be expected from a team as buffeted by injuries as this one has been. Call Australia A, Australia ‘C’, for the forseeable future, because there’s a XV of potential starters on the sidelines right now. Scott Sio, Dave Porecki, Folau Fainga’a, Allan Ala’alatoa, Izack Rodda, Rory Arnold, Lachlan Swinton, Michael Hooper, Quade Cooper, Samu Kerevi, Hunter Paisami, Izaia Perese, Andrew Kellaway and Tom Banks, off the top of the head.

But as Dave Rennie said on Sunday: “We’ve got to be better. While we know we’ll get a few guys back, whoever puts the jersey on has to front.”

Limping through each season and hoping everything will click in a World Cup year is what fans have been reduced to. Cheika’s Wallabies finished 2018 with a 30 per cent win rate off four wins from 13 Tests. They were beaten by Wales in the group stages, then smashed by England in the quarter-finals. The year before a World Cup year is the time when belief is bedded in or seeds of doubt take root.

Right now, the Wallabies’ course hangs in the balance. Rennie’s overall win rate is 40 per cent, or 10 wins from 25 Tests. They’re two from five this season, with the toughest of the Rugby Championship yet to come and a five-Test spring tour hot on its heels. Of those sides, you could only pick out Italy as a certain win. 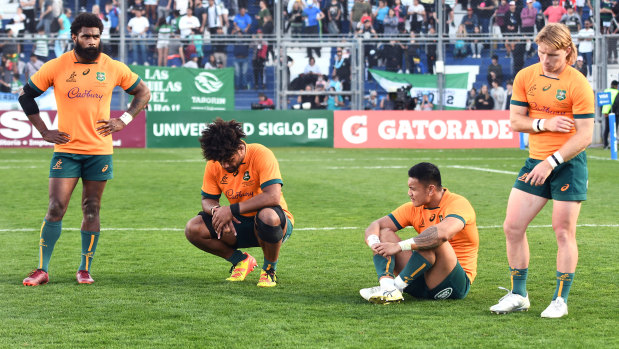 The Wallabies react after losing to Argentina by a record margin.Credit:Getty

In France next year they will likely play Argentina or England in the quarter-finals. Cheika and Jones are both seasoned Test coaches now. Rennie, for all his success in Super Rugby, for his measured, detail-driven approach and popularity among his players, will be the World Cup rookie.

Dave Rennie’s post-match interview with the Herald was the first time the Wallabies coach has betrayed frustration with the gap between what he believes his players are capable of and what they’re producing in game.

“We’re better than that, but you can talk about it all you like, you’ve got to put it on the park,” he said.

The search for answers continues, with no guarantee that returning players will make enough of a difference. Add fullback to the five-eighth crisis and there is not a lot to feel hopeful about as we head into back-to-back clashes with South Africa and New Zealand.

Watch every match of The Rugby Championship on the Home of Rugby, Stan Sport. All matches streaming ad-free, live and on demand on Stan Sport.