Youth, familiarity and Nathan Cleary are the simple reasons Isaah Yeo believes the Panthers can win back-to-back titles – and possibly reign supreme for the next three or four seasons.

Only the Sydney Roosters have won successive premierships in the past 28 years in a combined competition, but Yeo is confident the western Sydney club is right in middle of the so-called “premiership window” and will not let last Sunday’s epic win over South Sydney “cut the legs from beneath us”.

The Panthers co-captain also defended the amount of celebratory posts by the players on social media after the club’s first title in 18 years.

While the Roosters will welcome back some key personnel, including Luke Keary and Lindsay Collins, and already loom as a premiership threat in 2022, some of the other challengers are set to lose talent.

Penrith lose Matt Burton, Brent Naden and Kurt Capewell, but retain the bulk of the young group that clinched the club’s third premiership. 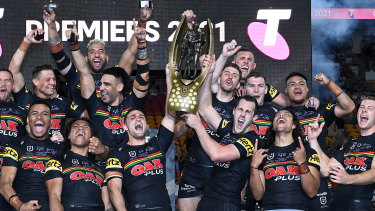 Sounding relatively fresh at the end of a week of partying, Yeo told The Sun-Herald: “Everyone says you need to lose a grand final to motivate you to win one. Our motivation now is to go back-to-back and make history again.

“It’s a wonderful feeling winning one and you want to put yourself there on top of the mountain again. Everyone talks about premiership windows. We’re certainly in that window, and winning a grand final won’t cut the legs from beneath us.

“I’d like to think we can keep growing and building as a club and winning competitions. That’s what we will discuss once we’re back at pre-season training.

“We’re a close side but also one that keeps each other accountable. We’re also one of the youngest sides to win an NRL premiership. We lose Matt Burton, Kurt Capewell and Brent Naden, but guys like Izack Tago and Taylan May will come through, and with that youth comes hunger and fresh legs.”

Yeo, 26, said the other teams in the top six would be contenders, and there was always a dark horse. He said the players had endured a roller-coaster period after the State of Origin series, which included injuries to Cleary, Brian To’o and Jarome Luai, as well as the loss of James Fisher-Harris for a few weeks to attend the birth of his son in Sydney.

Then when the Panthers lost in week one of the finals, Yeo said the players knew they would need to do it the hard way, but if they could defeat Parramatta and Melbourne, “we’d be battle-hardened for the grand final”.

Yeo knew Penrith had won the decider when Reynolds’ field goal fell short and rolled over the dead-ball line late in the game to give the Panthers a seven-tackle set. He dreaded watching Reynolds line up a sideline conversion just a few minutes earlier that would have tied the game.

“I was cramping when Adam took that shot and I was panicking because both hammys had gone on me,” Yeo said. “I was trying to get the pickle juice into me and [trainer] Craig Catterick was rubbing heat into my legs as I watched the kick.

“It was not a nice way for Adam to finish at Souths, and it would have been the ultimate fairytale had he kicked the conversion, then kicked the field goal, but I’m glad he didn’t.”

The Panthers have not been shy about posting photos of their premiership rings, as well as a patched-up Provan-Summons Trophy being pushed in a pram. Yeo says he saw the trophy in a car park on Friday and “it looked in good nick to me”.

Some fans were unhappy with the amount of online content the players posted, including Viliame Kikau singing “Glory, glory to South Sydney”.

“We’ve won and the boys are enjoying themselves,” Yeo said. “It takes a lot to win one, so when you do it’s bloody enjoyable. I wouldn’t spray another team for doing the same thing.

“Had we not won, the same people would be spraying us over social media saying we can’t win the big games.”

As for co-captain Cleary, Yeo said: “He’s a Clive Churchill Medal winner, a premiership winner, Origin winner … he could retire now and have one of the best resumes ever. He’s only 23. He’s still got 250 NRL games to go. You want to build your club around halfbacks and we’ve got one who is the best in the competition leading us around.”

Yeo started the long journey from the Sunshine Coast to the family home in Mudgee on Saturday, with plenty of planned stops for his heavily pregnant partner, Ashleigh. The couple will welcome their first child in six weeks.

Then it is back to pre-season training. Then possibly another title. Then a few more.

James Maloney revelled in watching his former Penrith and NSW Origin halves partner Nathan Cleary kick the Panthers to a grand final victory from his living room in the south of France and even FaceTimed him an hour after the win.

Like Penrith co-captain Yeo, Maloney said the frightening thing about Cleary was that he would likely get better.

“He’s only 23, he’s won multiple Origin series and now a grand final, and he will keep improving,” said Maloney, who hoped to bow out a winner himself for Catalans in the Super League final early Sunday morning (AEDT).

“I know he’ll enjoy this, come back next year and then start the process all over again. He’ll be last one leaving training. His kicking game last Sunday decided the match. He got that many repeat sets and put it into the corners so many times; he’s worked so hard at that for so long. It was awesome to see.”

Still on Maloney, it remains to be seen if Mitchell Pearce replaces him at the French club, despite having a year to run on his deal at Newcastle. Coach Steve McNamara worked with Pearce while he was an assistant at the Roosters. He and Maloney believe the No.7 would be perfectly suited to the Super League and the attacking brand of football.

DAN BIGGAR: South Africa will come twice as hard at us next week