After two months of weighing up his future at St Kilda veteran Dylan Roberton has announced his retirement from football, effective immediately.

Roberton, having played just one game in three years after suffering a serious heart scare in round four of 2018, took time away from the club in January to decide where he now stood as a player.

The 29-year-old father of three on Friday decided his health and young family came ahead of football. 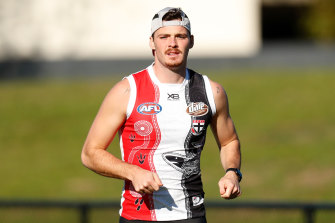 He missed the entire 2019 season after having a defibrillator surgically implanted as a safeguard to his heart issue and returned in 2020, playing the opening game of the season before losing his spot in the team.

“I’ve come to a point where I need to put my family and future first,” Roberton said.

“After lengthy discussions with my family and on the advice of my doctors, I’ve made the extremely hard decision to hang up the boots.

“I’m so grateful for the support of the entire St Kilda Football Club, particularly Dr Tim Barbour and Tony Brown, whose support and friendship has been unwavering over the past three years in particular.

“To my teammates and coaches at both St Kilda and Fremantle, thank you for giving me the opportunity to live out my dream.”

Saints coach Brett Ratten said the club would continue to support Roberton, who was a loved and respected player.

“He should be really proud of how he has dealt with everything life has thrown at him – it’s a real credit to his character,” Ratten said.

“Dylan has a great footy brain and he’ll remain an asset to our program for the remainder of 2021.”

Roberton was first drafted to Fremantle with pick 49 in the 2009 AFL draft and traded to the Saints at the end of 2012 after 37 games with the Dockers.

He was outstanding in 2017 when he became one of the best intercept marks and creative defenders in the game, playing tall and small. He was in the All-Australian squad that year and came runner-up in the Trevor Barker medal.

He played 92 games for the Saints but his career turned that day in Geelong in 2018 when he collapsed from a hitherto unknown heart condition.