Essendon ruckman Andrew Phillips will play for his old club Carlton in the VFL on Saturday, in another unusual compromise caused by the pandemic.

Phillips, who crossed to Essendon from the Blues at the end of 2019, will play in the ruck against Sandringham after the Bombers asked Carlton to play their ruckman in the VFL because Phillips has remained in Melbourne over the past fortnight while Essendon is in Queensland. 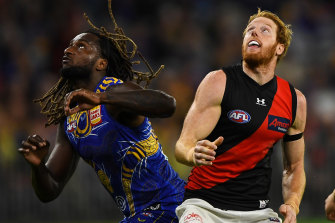 Carlton confirmed on Thursday that Phillips would play in the ruck for their VFL team, which did not have a specialist ruckman due to the rash of injuries to their big men. The Blues said they were happy to help Phillips, as requested.

The Carlton-Sandringham match is a normal VFL game and thus will count for premiership points, with the VFL hierarchy showing a willingness to compromise on listed players in order to navigate the difficulties and unusual circumstances of the pandemic.

Phillips, who was traded from Greater Western Sydney to Carlton and then to Essendon, chose to stay in Melbourne when the Bombers went to Queensland after he and his partner welcomed a baby son, Ned.

Phillips was one of just two Bombers who remained in Melbourne, with Patrick Ambrose, when Essendon left in response to the Sydney and Melbourne outbreaks of the virus, with the Dons playing GWS last week and the Swans this weekend.

The Blues have no recognised ruckmen available on their list, besides youngster Tom De Koning. Regular senior ruck Marc Pittonet, mid-season draftee Alex Mirkov and pinch-hitter and key forward Levi Casboult are all out injured, forcing Carlton to use a non-ruckman such as Jack Silvagni to support De Koning at senior level.

The Bombers are playing Aspley, another Queensland team, in the VFL this weekend. Their team with McCartin and Rance lost to Southport by three points.