The AFL will get what they want but not in the way they want it.

Its twin changes at the end of the year – cutting list sizes and interchanges – will immediately impact what happens next week at the draft table and next year on the field.

There will be fewer names called out on draft night than ever before due to the list size cuts and the doubts on this year's draft selections because of the coronavirus-robbed season in Victoria.

There will also be fewer ruckmen called out next week as the rucks have been caught in the pincer movement of the two rules. 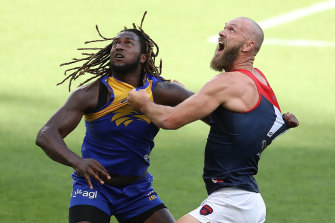 Nic Naitanui and Max Gawn contest the ruck during round one. Credit:Paul Kane

Firstly, with fewer list places available, clubs will not commit several years to develop speculative beanstalks while they fatten them up to play.

Secondly, and this is more important, the interchange cut means clubs will play fewer ruckmen next year.

The cut to the number of times players can be changed off the bench – down to 75 from 90 – combined with the expected return to 20-minute quarters mean clubs will alter who comes off the ground for breathers and when. For some players it will be a question of if they come off at all, not how often. Clubs will not evenly spread the rotation cuts across the field.

Most clubs are already planning around keeping their key position players at either end of the field the whole game, along with some of the deep forwards and backs. The hard-running high forwards and backs will still get spells.

That would mean the midfield can continue to effectively operate at the same level as this year.

So, the AFL will get their way and force players to stay on the ground for longer. It just won't be midfielders.

With fewer rotations more clubs will look at a Shaun Grigg role (like Leigh Brown before him, Shaun Grigg has now given his name to a role in footy). More clubs were doing it last season already and next year it will be likely that more clubs will use a tall midfielder as their faux ruck when their first ruck takes a break.

Justin Leppitsch offered the interesting description on radio on Wednesday of ruckmen as the "least most important" position on the ground. He's right, but they are also not unimportant.

What is of less consequence, or of more questionable value, is the second ruck. They will be like wicket-keepers who can't bat next year – there is no place for them. So unless the second ruck can genuinely play most of the game as a forward more clubs will look to hybrid midfielders rather than hybrid forwards.

The rotation change raises a question now of West Coast and game time for Nic Naitanui. The Eagles ruckman spent less time on the ground before heading to the bench for a break than any AFL ruckman – 7:08 minutes – last season in short quarters. Compare that to Max Gawn, who at 15:52 was the equal highest.

Naitanui is so damaging in his bursts that the Eagles will not compromise his impact by altering his game length but there will be a consequential question of how they handle their second ruck given fewer rotations.

All clubs will be wrestling with the question for the mix they have. Brodie Grundy had a relatively poor second half of the season for Collingwood but as a player with high endurance and running ability he could be one who benefits from a return to longer quarters and fewer rotations. His tap work has always only been mediocre so rule changes won't affect that. 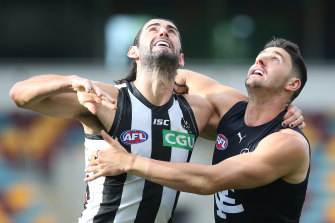 St Kilda played two rucks last year and while there remains a doubt on Paddy Ryder's fitness Rohan Marshall is adept forward of the ball.

Gawn has emerging player Luke Jackson there who is probably a better long term ruck than forward.

The Bulldogs used Josh Dunkley as a pinch-hitter last year but then traded Stef Martin in to help Tim English. Are they forced to rethink how they approach the two rucks now?

Geelong hasn't known what to do about rucks since Brad Ottens left, so that question remains for them, and it raises questions for the Tigers when Ivan Soldo is fit of striking the balance with Toby Nankervis, or whether they play only one and another Shaun Grigg type.

They will be not alone in wondering what to do next. The answers they come up with will not necessarily be the ones the AFL was expecting and not ones many ruckmen will relish.