Oh to be a fly on the wall the next time Rugby Australia and their South Africans counterparts meet after the full World Rugby report into Rassie Erasmus’ conduct peeled back the layers of an ugly British and Irish Lions tour.

Its findings were expected – a ban for Erasmus – but the true impact of the report came in the details that spelt out the impact on Australian referee Nic Berry, the target of Erasmus’ now infamous video.

“I have spent many years trying to build my reputation as an international referee and in the course of his video which was posted online, Mr Erasmus has caused it immeasurable damage,” Berry said in one part of his evidence, an observation that would make it nigh-on impossible for him to referee the Springboks any time soon, and never in South Africa.

It was devastating testimony – here we have a Rugby Australia employee who felt so damaged by the simple act of officiating a game in South Africa that “my reputation as a referee and person will forever be tarnished”. What now for Berry’s career? It has possibly been ruined.

But the sad truth is that this has been building. Venerated as the best rugby can offer, British and Irish Lions tours have become spiteful, poisonous affairs.

The past three tours have had an undercurrent of nastiness to them, leaving a trail of damaged individuals in their wake. Lions coach Warren Gatland is on record as saying he didn’t even enjoy the tour of New Zealand in 2017, for goodness sake, and could barely raise a smile in Sydney even after clinching the series with a win in the third Test in 2013. 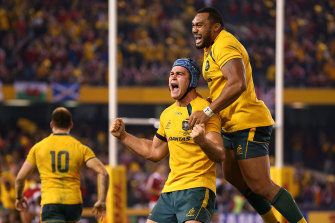 Then-captain James Horwill and Sekope Kepu show what a Lions tour means in celebrating their win in the second Test in 2013.Credit:Getty

Meanwhile, former Kiwi referee Chris Pollock told New Zealand media in 2017 that he couldn’t even bear hanging a signed Lions jersey on his wall after Gatland tore him to shreds following the Wallabies victory in the first Test in 2013.

“I didn’t appreciate just how big the Lions is,” Pollock said. “I had another two weeks in that Lions environment where I was copping grief pretty much everywhere I went.”

The question, then, that has to be asked is: what’s the point? Have the stakes become so high that it is now just accepted that people are thrown under the bus?

Clearly, Rugby Australia and the British and Irish Lions must act, and they must act publicly and in tandem. 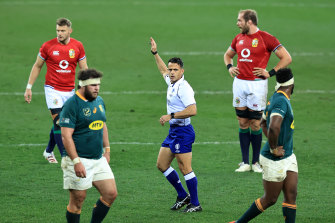 Nic Berry awards a penalty to the Lions during the first Test of the South Africa tour in July.Credit:Getty

While the focus has naturally been on winning the right to host the Rugby World Cup, the Lions tour of Australia in 2025 is the nearest date on the calendar and Berry’s painful evidence would suggest all is not well. It is too easy and too simplistic to dismiss this as an Erasmus-only issue. Regardless of what you think of his conduct, he did hit the nail on the head during the tour by saying that its scarcity – once every 12 years – changed the rules of engagement. Winning had become everything.

It’s also easy to blur this issue by getting into the micro details of every refereeing decision, and arguing that Erasmus was justified in that video because World Rugby may or may not have agreed with some of his views on Berry’s decisions.

But here’s the truth on that issue – and this is incredibly important: It is not uncommon for that to happen. In fact, the Herald understands that Gatland himself received an email from a New Zealand referee during Super Rugby Aotearoa last year, acknowledging that Gatland’s Chiefs team were probably hard done by with a couple of decisions. And, if you think back, Gatland was under pressure at the time, because he couldn’t buy a win at the Chiefs, and they finished the year with a 0-8 record.

In other words, that is how the cookie has crumbled for many years. Referees make mistakes, coaches question them, referees admit mistakes, and the sun rises the following day.

There will always be tension on Lions tours. Neither Rugby Australia nor the Lions can spare the likes of Robbie Deans the treatment he copped in 2013. And, in a sense, coaches know what they sign up for. However, I was in Australia in 2013 and in New Zealand in 2017, and while the travelling Lions fans brought colour and humour, there was a growing sense that the entire tour was in danger of being swallowed up by the pressure to win the three Tests.

A bit of the magic has gone, and malice has stepped in to replace it.