Rugby Australia chair Hamish McLennan has revealed the relationship between RA and New Zealand Rugby is at its "lowest ebb" as the messy dispute over The Rugby Championship scheduling rolls on.

On a day in which All Blacks coach Ian Foster continued New Zealand's campaign to have The Rugby Championship schedule changed, McLennan was a guest on Kiwi rugby show The Breakdown. 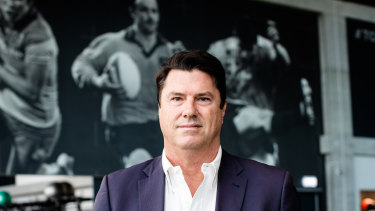 Hamish McLennan believes RA’s relationship with NZR is at its lowest ebb.Credit:Edwina Pickles

Relations between the trans-Tasman nations have disintegrated this year on several fronts but none more so than the possibility of New Zealand having to spend Christmas Day in quarantine, rather than with their families.

NZR is pointing the finger at RA but when the shoe was on the other foot – and it was the Wallabies who were set to spend Christmas in quarantine – NZR would not agree to a five-week tournament.

"On numerous occasions, for the record, going back to August 27, we at RA said we would be prepared to entertain a five-week competition but that was knocked on the head by New Zealand, South Africa and Argentina," McLennan said.

Australia then voted with New Zealand to play six matches in five weeks at a September 17 meeting. 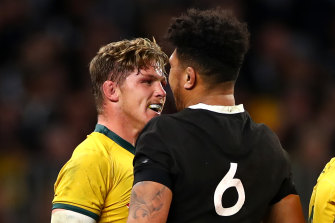 Michael Hooper’s Wallabies renew hostilities with the All Blacks on October 11.Credit:Getty

That was also knocked on the head by South Africa and Argentina, leaving the trans-Tasman nations with little choice but to agree to the current competition format.

NZR says it never agreed to the six-week format but McLennan has board minutes which prove otherwise.

"I've seen board minutes from September 17 where the six-week competition was signed off," McLennan said.

The "messy" nature of the disagreement has seen the relationship deteriorate rapidly.

"There is respect there but the relationship is at probably the lowest ebb it's ever been at," McLennan said.

"But I'm trying my hardest to fix that over time."

Fixing the relationship may be aided by lobbying South Africa and Argentina to agree to a schedule change.

The other option is to move either the third or fourth Bledisloe Cup Test.

The Wallabies will face the All Blacks in New Zealand on October 11 and 18 before returning to Australia to prepare for The Rugby Championship.

The two weeks in between the October 18 Test will likely be spent in isolation from the general public, making it almost impossible to play a match prior to the November 7 TRC start date.

That leaves the possibility of playing the final Bledisloe three or four days after the December 5 match.

Sources have told the Herald SANZAAR sold the revised TRC to broadcasters on the basis that there would be six consecutive double header Saturdays.

Any change to the current schedule would force SANZAAR back to the negotiation table with broadcasters and put millions in much-needed revenue at risk, a risk the governing body do not currently want to take.

If all four countries can't come to an agreement, the All Blacks have not ruled out walking away from the December 12 Bledisloe at ANZ Stadium.

"I'd be really concerned about a boycott. I think it would be a tragedy for the TRC and the game," McLennan said.

"It's 10 weeks away. The restrictions are unwinding a little bit here. The NSW government has done a great job with contact tracing and we've had two days in a row where we've had no new cases.

"I think we all just need to take a deep breath and stand back a little bit."