When Rugby Australia chairman Hamish McLennan went fishing last month with a threat to raid rugby league for its best talent, no one saw this twist coming.

RA have poached the NRL’s chief financial officer and salary cap auditor, and the right-hand man of its CEO, Andrew Abdo, Richard Gardham.

Gardham will replace chief operating officer Adam Foulsham, who was McLennan’s man brought in to gut the business to save it during the COVID-19 pandemic.

Save it he did, and with a Lions tour and two World Cups on the horizon, Foulsham decided it was job done, paving the way for RA to land the game’s first major scalp.

From Deloitte originally, Gardham joined the NRL in 2014, eventually assuming responsibility for the salary cap auditing and retaining that in his portfolio when he was made CFO in 2020.

It’s an intriguing bit of recruitment in light of McLennan’s aggressive rhetoric around poaching NRL players who grew up with rugby. At the very least, they’ll know exactly how much they’ll have to pay.

The distinguished Australian career of Matt To’omua appears to have come to a close, with the 32-year-old set to leave the Rebels and take up a deal in Japan.

Toomua has been granted a release from the final year of his contract with Melbourne and Rugby Australia, after the 54-Test Wallaby was offered a multi-year deal to head north and play in the Top League.

Toomua was re-signed through to the 2023 Rugby World Cup in mid-2021 but after falling off the Wallabies radar recently under Dave Rennie, he was granted permission to test the market.

After debuting for the Brumbies as a fresh-faced 18-year-old in 2008, Toomua has been a superb servant for Australian rugby. He played 84 Super Rugby games for the Brumbies and the Rebels, and featured in 54 Tests for the Wallabies – including at two Rugby World Cups.

Toomua also played 41 times for Leicester during a highly-regarded three-year stint in England.

Eddie on the hunt for Origin tickets

England coach Eddie Jones loves his rugby league. A Rabbitohs supporter, Jones has always looked to rugby league to improve his own teams, be it through players, coaches or strategies.

So it’s no surprise the former Wallabies coach, who arrives on these shores later this month with his England team, has been on the hunt for tickets for the second State of Origin match in Perth.

The Cauliflower hears Jones has been messaging contacts trying to get his hands on as many as 60 tickets for England players and staff to watch the Sunday night match at Optus Stadium on June 26. 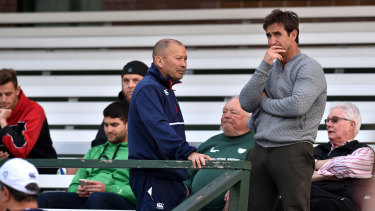 Eddie Jones invited Andrew Johns along to an England training session before the third Test against the Wallabies in 2016. Credit:Steven Siewert

No doubt Jones’ assistant, former Souths and Broncos coach Anthony Seibold, has also been trying to pull a few strings to get seats for the match.

The second State of Origin match is six days before England’s opening Test with the Wallabies at the same venue.

However, the Wallabies won’t be in attendance. They’ll be based on the Sunshine Coast before travelling to Perth on June 30, two days out from a blockbuster season opener.

Wallabies star Samu Kerevi has confirmed his intention to represent Australia at next month’s Commonwealth Games in Birmingham and revealed that Maurice Longbottom is helping him make huge defensive improvements.

The Cauliflower revealed earlier this month Kerevi had been sounded out to feature again in sevens after coming on board last year with the national team for the Tokyo Olympics. 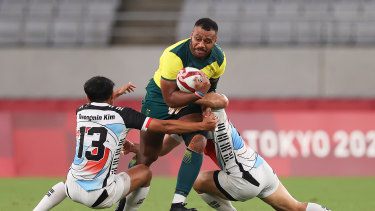 “I’m definitely putting my hand up for the sevens,” Kerevi said. “The timing has lined up really well with the Commonwealth Games. “I’ll be there, even [if it’s just] holding pads, to help the team bring home a gold medal.”

Kerevi says sevens has helped his defence more than anything and he has teammate Longbottom to thank for sharpening his work without the ball.

“In sevens you can get found out … in front of everyone. It can be embarrassing,” Kerevi said. “I would ask Maurice Longbottom to do tracking with every day. Just because I knew he could step me.

“In the first couple of days it was so hard trying to track him. He’s got some amazing feet. If I can track a guy like Maurice Longbottom, if I can even get close and get my hands on him, it’s going to help me in 15-a-side game. That’s transferred over.”

Potter and Porter line up for Tigers in decider

Sydney Uni products Guy Porter and Harry Potter will fly the flag for Australia in the grand final of the Gallagher Premiership on Sunday, when they line up on the wings for Leicester against the post-salary cap scandal Saracens. 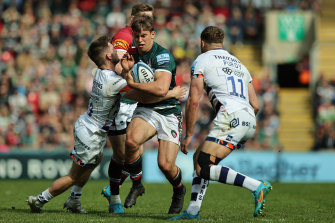 Under impressive coach Steve Borthwick, Leicester have undergone a major turnaround and been at the top of the ladder all season and their two Aussies (okay, both have English passports) have been valued contributors.

Both were at Super Rugby clubs in 2020 when COVID-19 shut everything down – Porter at the Brumbies and Potter at the Rebels – but with no caps between them and an uncertain future, they both took a punt and headed to England.

It was Australia’s loss, and now Porter is even a roughie to be in Eddie Jones’ England squad.

Also on the bench for the Tigers is Nemani Nadolo, who is set to join the Tahs next year.

Watch every match of the July Test Series on the Home of Rugby, Stan Sport. Kicks off Saturday 2 July with Wallabies v England, New Zealand v Ireland, South Africa v Wales and Argentina v Scotland. All streaming ad-free, live and on demand only on Stan Sport.