The lawyers for Sam Burgess have made a formal request of Phoebe Burgess' legal team to reveal how allegations levelled against the former NRL star made their way into the public domain.

Mr Burgess' lawyer Bryan Wrench told Moss Vale Local Court on Wednesday he had requested the correspondence between his client's ex-wife and The Australian, after the newspaper reported accusations of drug abuse and domestic violence against the former South Sydney skipper. 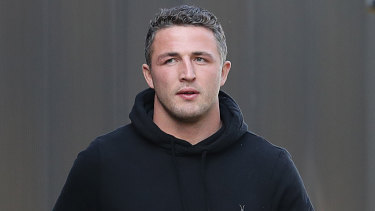 The allegations were outlined in a 50-page affidavit submitted to police by Ms Burgess. Police prosecutor Jamie Palmer confirmed to the court police did not leak the statement to the newspaper.

He said Phoebe Burgess' lawyer Rebekah Giles has refused to comply with the request. The debate will return to Moss Vale Local Court next month, with Ms Burgess' lawyer set to attend.

Mr Wrench also submitted a "chronology of events" as to when Ms Burgess' made the 50-page statement to police. 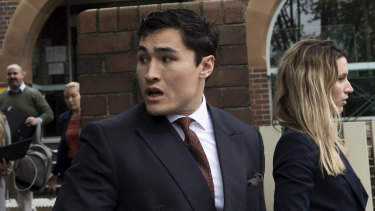 Mr Wrench said during an earlier court appearance that Ms Burgess handed the statement over to police six days after the couple got into a dispute.

The lawyer said on Wednesday the timeline was relevant as it demonstrated the "animosity" towards Mr Burgess.

Mr Wrench also said the legal team had still not seen a copy of the 50-page statement in question.

"We still have not got the statement, nothing has done about the investigation as to why the statement was released to the media," he said.

Ms Palmer said the statement would be not be relied on as evidence in the police case and therefore was not required to hand it over to Mr Wrench.

"It's not relevant to the matters before the court," she said.

Mr Burgess' legal team was in court on Wednesday after the former South Sydney skipper was charged by police following a clash with Mr Hooke on October 19 last year.

During the incident, it is alleged that Mr Burgess went to the home to visit his children and was asked to leave after tensions escalated between the pair.

He was later handed a charge for common assault. He has since entered not guilty pleas to both charges.

A hearing for the charges has been set for November 16.