Sam Reid has been suspended for two matches for his bump on Fremantle’s Nat Fyfe during GWS’ loss to the Dockers on Sunday.

The difference with Patrick Dangerfield’s bump on Jake Kelly last week – where the Cat was suspended for three weeks – was that Match Review Officer Michael Christian deemed Reid’s hit high impact instead of severe. Fyfe was concussed as a result of the bump. 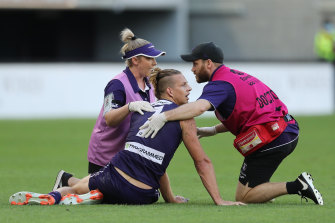 Nat Fyfe of the Dockers receives attention after a heavy knock from Sam Reid.Credit:Getty Images

“We went through a process of whether Sam elected to bump or whether he was just bracing,” Christian said.

“The fact he was on the move, he was not in a stationary or near stationary position.

“With the impact grading there’s a number of factors … including the look of the incident, the speed at which the player is travelling, the momentum the player has, the medical report, the impact on the player.”

Christian said it was not becoming more of a risk to bump and that concussion did not automatically equal a suspension.

“The impact only has a role when there has been careless or intentional conduct,” he said. “No tougher than it’s been in my time in this role. It’s quite clear if you elect to bump and make high contact it can be deemed careless. You must do it fairly.”