The Bears pair with a point to prove! Bristol’s Max Malins and Ben Earl are gunning for parent club Saracens: ‘We’ve spoken about playing them for ages… I’m sure there will be a bit of chat’

Ben Earl is panting heavily as he sits down on a grassy bank at Bristol’s new £11.5million training facility – the England flanker already embracing his new surroundings with a neatly-sculpted West Country mullet.

He plonks himself down beside house-mate, team-mate and fellow loanee Max Malins minutes after a gruelling session and extra defensive work in 32-degree heat to talk about a weird week.

With sweat pouring off him, and an isotonic drink in hand he initially struggles to speak. 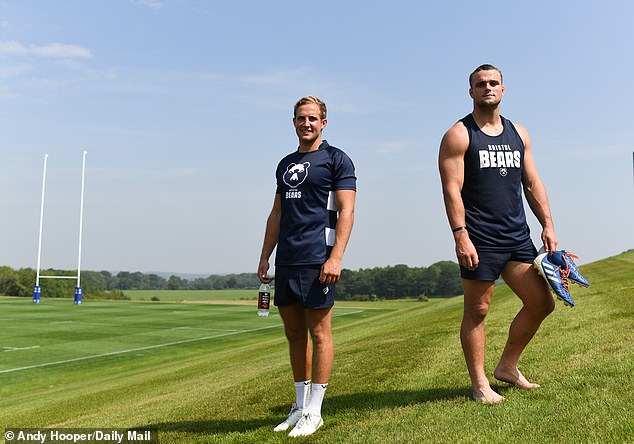 ‘As long as you make it clear we’ve come straight off the training pitch!’ On this evidence there is no chance he is going to take Saturday’s match lightly.

This is not just a first since March, nor just a debut for Bristol. It is against Saracens – his parent club who he will return to with Malins next summer.

So the strangest of years just became stranger. 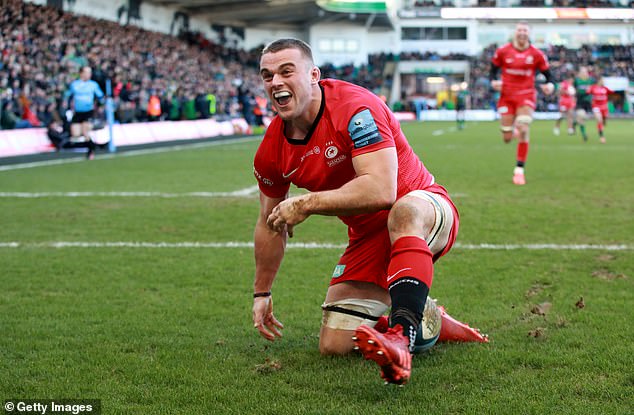 ‘We’ve spoken about this for ages,’ says Earl to Malins.

‘It’s going to be a weird one. It’s dead silence from everyone back in London, so I think they’re coming for us!

‘It’s a game of rugby – you’ve got to play as well as you can and at the end of it we’ll all be mates but it will be a weird one to begin with.’ Malins adds: ‘You know they’re going to come for you, but at the same time it’s our club and if you’re involved you want to do well, and show them something.

‘There’s definitely mixed emotions. I’m sure there will be a bit of chat!’ The pair have just about settled into Bristol life, sharing a flat in Clifton – five minutes from the new training venue – and when they are not there it is coffees, walks on the Downs and hours watching the cricket.

Earl is friends with England batsman Ollie Pope and went to school with Zak Crawley. A ‘medium-fast’ bowler himself he took five wickets in the annual Saracens squad match last year, with Malins hitting a half-century.

The duo are committed to their new temporary life in Bristol but will not go too far. 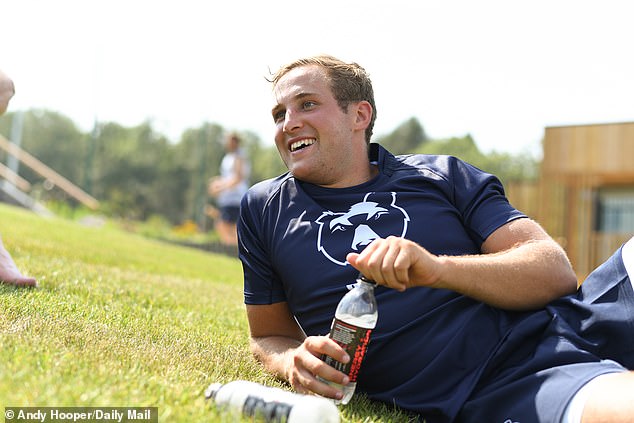 ‘When are you getting the Bears tattoo lads?!’ heckles Dave Attwood from afar.

It will be a surreal experience for Earl coming up against Maro Itoje, Jamie George and the Vunipolas.

Both he and Malins, who is not yet fit to play today after a few lockdown knocks, have been turfed out of the Sarries WhatsApp groups and have discussed how on earth they celebrate in case they score a try.

‘I’m not sure Ben can do the ol’ big chest pump!’ laughs Malins

Earl continues: ‘If I’m lucky enough to score I think I’ll be very low-key and try and run back to the half-way line.’ Malins counters: ‘We talked about doing the Liam Williams celebration of the “calm-down” hands!’ ‘Brilliant!’ giggles Earl who is set to play a half from the bench at Ashton Gate. 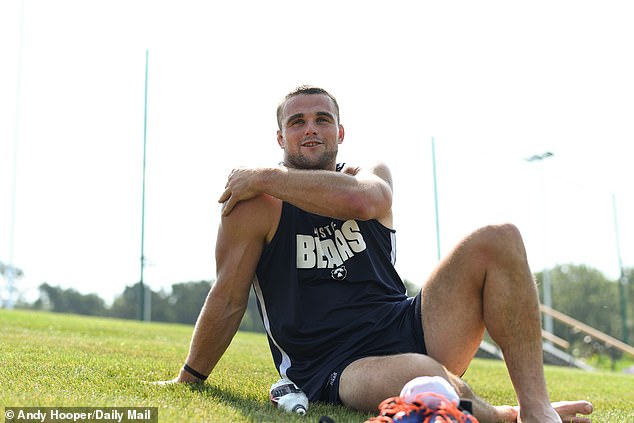 ‘We don’t want to disrespect our team-mates – they’ve been great with us for four-or-five years. We’ll be respectful but will play hard.

‘We’ve got no credit in the bank here – we’ve still got to prove ourselves – and the only way to do that is to play hard. The boys back at the club are going to respect you more if you went harder than softer.’

It has been a mad few months for this pair. With the salary cap saga engulfing Saracens it became clear quickly that unlike the established England internationals, youngsters were going to have to move to quicken their development.

‘When the news came out Eddie Jones was pretty clear that he wasn’t going to pick me if I wasn’t playing in the Premiership,’ says Earl, who made his Test debut during the Six Nations in February. 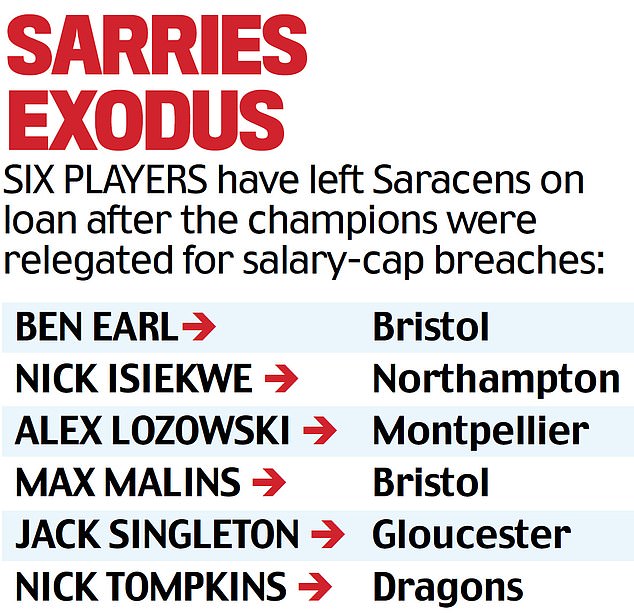 ‘When he says that your mind in pretty much made up.’ Initially clubs wanted Sarries starlets only on permanent deals.

‘But then I got a phone-call from Pat Lam,’ 23-year-old Malins explains.

‘He said he lives in the present and wants the strongest squad possible at Bristol, told us what he wanted to achieve and offered the loan.

‘Seeing this training facility, how well they’re doing, growing, it made it an exciting prospect.’ With Bears director of rugby Lam snapping up the two hottest Sarries prospects – Earl the big, quick flanker, and Malins touted as a ‘young Beauden Barrett’ at full-back or fly-half – others followed suit.

Nick Isiekwe went to Northampton, Jack Singleton Gloucester, Nick Tompkins Dragons and Alex Lozowski Montpellier – all will be back next summer and have re-committed to Saracens for years to come. 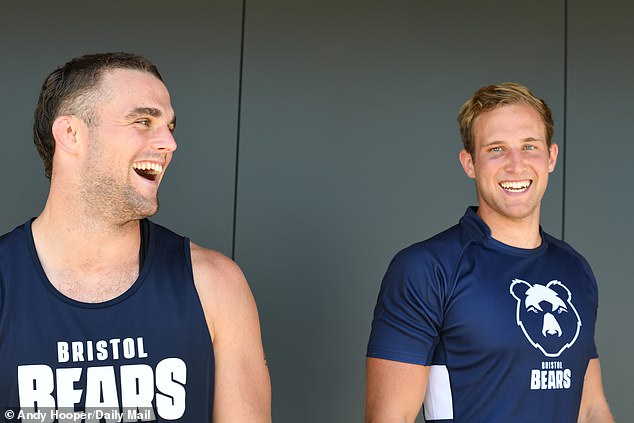 Naturally, when these two speak about the Bears it is not yet always ‘we’ or ‘us’ – mostly still ‘Bristol’ with Saracens as ‘the club’ – but that will surely change as the pair bed in, and start competing for honours.

Both have Premiership winners’ medals already, having played a handful of games last season, but Bristol fans should not worry that they are just out West to cruise for a season-and-a-half.

‘We are very much here to win and think we can,’ says Earl.

‘We’re in the early stages of our careers so we’re here to learn, gain a fresh perspective but also to win trophies.’

Malins – who will learn from superstars Semi Radradra and Charles Piutau – adds: ‘This playing group shows a lot of potential and can go a long way.’ The Bristol move will surely be a rousing success for both, but will there be any guilt that they did not tough it out in the Championship with their relegated mates? 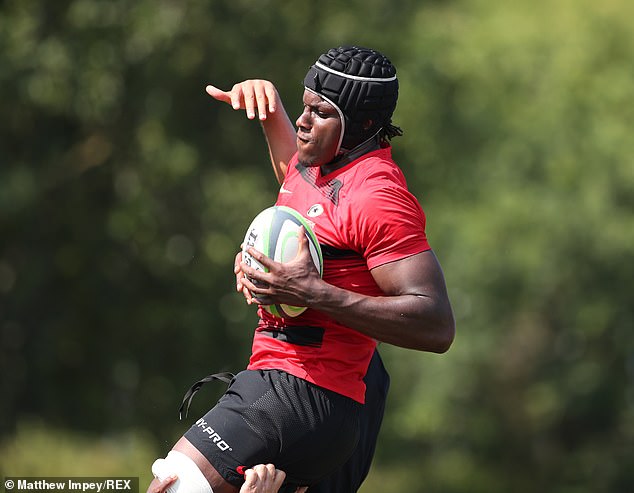 ‘We get a bit of chat from the boys who are sticking it out,’ says Malins.

‘I would have loved to but if I went to play Championship rugby next season I wouldn’t necessarily progress as a player the way I would in the Premiership.’

Earl adds: ‘I for one certainly feel guilty that when it comes to 10 years down the line and we’ve hopefully had illustrious careers and won lots of stuff for the club, it’ll be tough saying we weren’t there during the hard times.

‘But it would have been seen as a year wasted so we had to make the most of it.’ After lockdown, the move and everything that went with it, it was fate that this would be the first game in 22 weeks. On Wednesday Earl’s mullet was whipped off in preparation – he must mean business.

‘I wouldn’t want another game,’ he says. 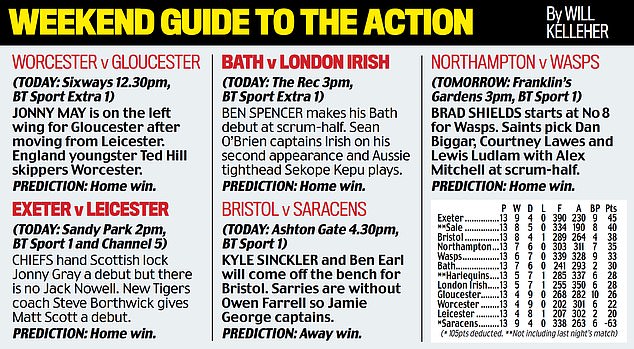