Rugby Australia have signalled an intention to take major Test matches back to Sydney’s east after pencilling in a clash with the world champion Springboks at the SCG in September.

With the Wallabies due to play their first Test at the Sydney Cricket Ground in 35 years against France on July 7, sources with knowledge of the plans told the Herald that RA are working to schedule a second Test at the venue on September 11 – just 66 days later – against the Boks. 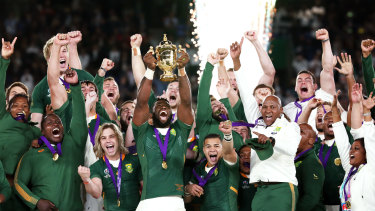 The world champion Springboks are coming to Sydney in September.Credit:Getty

While the fixture has not yet been rubber stamped due to NRL finals being on at the same time, the SCG is the preferred option for the Wallabies’ first Test against the Springboks in 671 days, ahead of Bankwest Stadium and Stadium Australia, or in other states.

The decision to return to Test rugby to Sydney’s eastern suburbs with the France clash has so far proven popular. Almost half the available tickets for the first Test against France have been sold and as many as 12,000 members seats have been taken.

With the Sydney Football Stadium being rebuilt, Wallabies Tests at Stadium Australia and Bankwest Stadium in the last two years have resulted in underwhelming crowds and results. 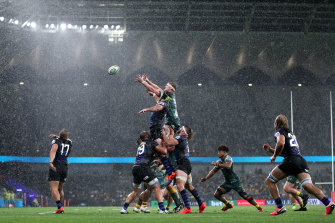 Matt Philip competes for a lineout against Argentina at Bankwest Stadium in December, 2020.Credit:Getty

The final Test at the SFS, in 2018, was a series deciding thriller against Ireland played in front of a record 44,085 fans.

Sources with knowledge of the discussions at RA say officials are keen for big-ticket games to return to to Sydney’s eastern suburbs and are eagerly awaiting the return of the rejuvenated SFS in 2022, despite it only having a capacity of 42,500.

The NRL finals begin on September 10 but the Roosters are the only club which play their home games at the SCG and sources with knowledge of the situation say RA are hopeful a scheduling clash can be avoided with the NRL, so the Springboks Test can be played at the Moore Park venue on Saturday, September 11.

The venue for the two home Tests against Argentina at the end of the Wallabies’ Rugby Championship campaign are yet to be determined. 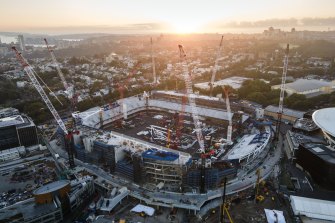 An aerial view of the construction of the new Sydney Football Stadium at Moore Park.Credit:Brook Mitchell

Melbourne’s AAMI Park is in the box seat to host one of the two Tests and one of Bankwest Stadium, GIO Stadium in Canberra or Cbus Super Stadium on the Gold Coast is expected to host the other.

But before the Wallabies season begins, RA are hopeful the five Australian Super Rugby franchises can restore some pride in the final three weeks of the trans-Tasman competition.

Australian teams are 0-10 against their New Zealand counterparts after two rounds. The Reds and Brumbies were thought to be some chance of competing with the New Zealand sides but after a close loss to the Crusaders, ACT were outplayed in almost every department in a 40-19 loss to the Chiefs.

Brumbies five-eighth Noah Lolesio admitted his side were “devastated” with their performance in Waikato but the playmaker is relishing the challenge of facing the best provincial teams in the world.

“I’m feeling good, to be honest. I love playing the Kiwi teams. It’s a different brand of footy compared to what us Aussies play and it’s a different challenge, also, presenting different defensive pictures,” Lolesio said.