Geelong’s coach Chris Scott was prepared to quit last year if his players doubted he could lead them to an AFL premiership.

Scott bluntly asked captain Joel Selwood, Patrick Dangerfield and other players if they believed he could take the Cats to the flag. 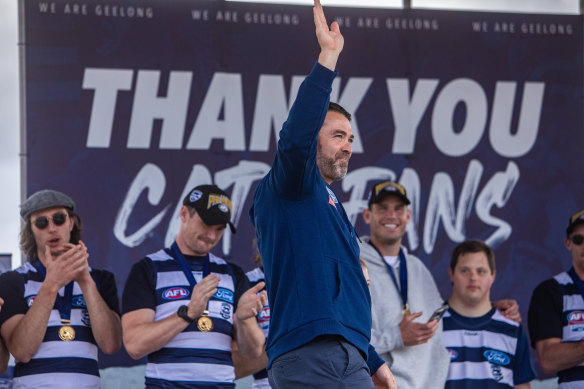 “And I made it hard for them. I said ‘if you have any doubt at all, you have to tell me’.

“It was a bigger group than just Joel and Pat, I am not going to name those (other) guys.

“But I have done a version of that almost every year I think but at the end of ’21 in particular, they were emphatic – and that support was the basis of my drive for ’22.”

Asked if he would have quit if the players expressed any doubt, Scott replied: “Yep.“

That result was Geelong’s fourth preliminary final defeat since 2016. They also lost the 2020 grand final. After the backing of his players, Scott continued as coach and delivered the Cats this year’s premiership with an 81-point belting of Sydney in last Saturday’s grand final.

“I would like to think I do the requisite level of soul-searching every year,” Scott said. “The most important thing to me at Geelong is I make sure I am doing what is right for the club.

“I did think really hard about it – whether we could do it. And if we couldn’t, we needed to change tack and maybe part of that change involved me.

“But by the time the end of the season rolled around, I was committed and I was sure that with the good people that we have around that we could put a plan together that would give our guys a chance.”

Keep up to date with all the AFL trade action this week with our daily newsletter. Sign up here.

Live Judiciary: Titans skipper out to save season over alleged Johnson bite