Home » Rugby » Secret meetings and a chicken dinner: The inside story of Jones’ Wallabies return

The details of the stunning move to bring Eddie Jones back into the Wallabies fold were hammered out over a secret Portuguese chicken dinner at the lavish home of Rugby Australia chairman Hamish McLennan in July last year.

Months before Jones was officially unveiled on Monday for a second stint as Wallabies head coach – and 22 years after he was first appointed in 2001 – RA officials hatched a clandestine plan to gauge whether the man who helped Australia to a World Cup final in 2003 would consider coming home. 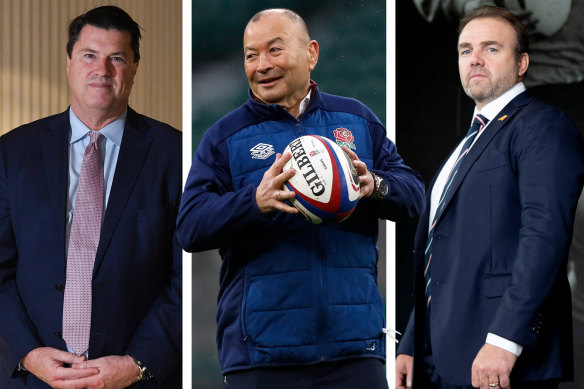 Only a handful of figures in Australian rugby knew about the covert operation to try to get Jones back to Australia from 2024 onwards.

The negotiations were incredibly delicate, given incumbent coach Dave Rennie had already spoken about the possibility of extending his contract beyond its expiration after the 2023 World Cup.

Jones had just masterminded England to a series victory over the Wallabies in Sydney when McLennan and RA chief executive Andy Marinos decided to act. The former invited Jones to his place for dinner in the days after England’s series win. Nothing formal, just a chat about future plans.

At this point, Jones was contracted with England until the end of 2023 and his grand plan of steering them to another World Cup final looked to be on track.

The trio decided against meeting at a Sydney restaurant or bar to avoid the secret getting out. Instead, Jones caught an Uber over the Harbour Bridge to McLennan’s multimillion-dollar harbourside home on the lower North Shore.

McLennan’s wife, Lucinda, cooked dinner – a serving of Portuguese chicken and salad – which was warmly appreciated by Jones.

McLennan, Marinos and Jones discussed a range of issues, including the possibility of private equity buying into the game and the health of grassroots rugby, something close to Jones’s heart.

At the dinner, the two most important men in Australian rugby were impressed by Jones and his inquisitive and forthright perspectives on the modern game.

It was evident that Jones wanted to return home. The carrot of a home British and Irish Lions series in 2025 and a World Cup in Australia in 2027 appealed to Jones, a polarising figure who has always talked down his ambitions – at least publicly – of a rugby return to the country that “divorced” him in 2005.

Coincidentally, the meeting occurred just days after an alcohol-fuelled Wallabies fan labelled Jones a “traitor” at the third Test at the SCG.

“That fan’s behaviour is totally unacceptable and is not welcome at a Wallabies Test if he carries on like that,” McLennan said the following day. “We should be acknowledging Eddie’s achievements as a great Aussie export. There’s too much tall-poppy syndrome in that comment.”

If only fans had been aware that RA heavyweights had already been in contact with Jones in a bid to lure him home in 2024.

The plan’s origins can be traced back to the Wallabies spring tour in 2021 when McLennan caught up with Jones in London in the November. After that, the pair stayed in regular contact.

Last year, as Australia embarked on a tough five-Test tour in Europe, McLennan and Marinos once again found time to meet Jones. Again, very few people knew about this catch-up.

Two months earlier, McLennan had guaranteed Rennie’s future through to the World Cup.

“Dave’s done a great job,” McLennan said at the time. “There’s been real progress that has been made. He’s as frustrated as anyone [about recent results].”

Last November, Rennie was in a relaxed mood, preparing to board a charter flight from Saint-Etienne in France to Edinburgh for the first match of the spring tour against Scotland.

At that point, Rennie’s win percentage stood at 37.9 per cent from 29 Tests in charge. He was asked if he wanted to stay on as Wallabies boss in 2024.

“Yeah, sure,” Rennie said. “I’m enjoying what I do but I’m also realistic that you’re judged on results. We’ll see how things pan out over the next six months.

“We’ve all got skin in the game. You know as head coach, if we’re losing games, you’ve got to step forward and take it on the chin because that is the way it is.” 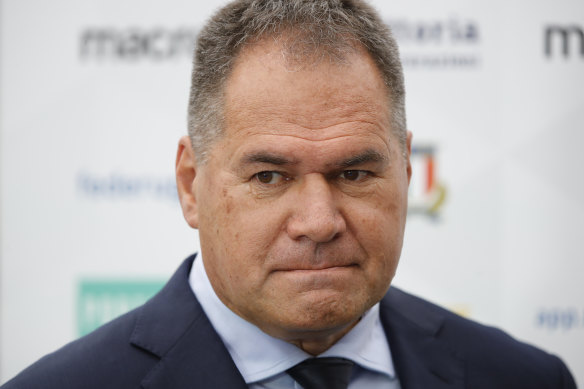 Ultimately, it was Australia’s loss to Italy in Florence that was the beginning of the end for Rennie.

RA officials sat in the stands in disbelief that the Wallabies had succumbed to their first defeat to Italy since the sides first met in 1983.

In mitigation, Rennie had rested key players, and rookie No.10 Ben Donaldson had nearly slotted a match-winning penalty after full-time. But this wasn’t the Wallabies way.

After near misses against France and Ireland, Australia won the last Test against Wales, a result that many thought had saved Rennie’s job. It had not.

And once England sacked Jones on December 7, it was game on for RA. McLennan needed to move quickly.

He picked up the phone and asked Jones if was interested. From there, the pair discussed possibilities, confidentially and respectfully.

But seldom do coaches get sacked and their successor is named in the same press release.

As contracts were written up and pen about to be put to paper, Rennie was on the Gold Coast running Wallabies players through what to expect in a World Cup year.

On a Zoom call with reporters just last week, Rennie was asked about reports that Jones was being courted by RA. His comments were a telling insight into the relationship of the Wallabies coach and his chairman.

“I haven’t spoken to Hamish recently, so I can’t really comment much on it,” Rennie said.

By Monday morning, Rennie was told on a Zoom call he didn’t have a job.

By Monday afternoon, the Wallabies had released a video package, featuring clips of Jones from that night in 2003 when Jonny Wilkinson kicked the drop goal that broke Australian hearts in the World Cup final.