The AFL will have a “sensible discussion” with the Victorian government if future crowd restrictions rule out the MCG as the venue for this year’s grand final, but chief executive Gillon McLachlan was adamant it was still too early for that conversation.

The season finale is two months away and there have been calls for the game to be moved to Optus Stadium in Perth as COVID-19 lockdowns and restrictions have had the league and its fixture in a tumult. As yet, no one is prepared to outline how high the crowd figure would need to be for the grand final to remain at the MCG, but the AFL is sticking to the fact it has a contract to play the match in Melbourne. 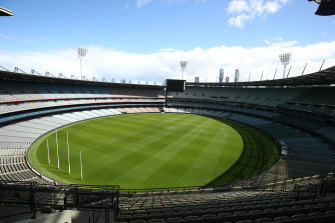 Holding this year’s grand final at the MCG remains precarious.Credit:Getty

“We have a contract to play at the MCG, I’m not being unrealistic … until [we are at] the point where we can’t do that, that’s where it will be. I reckon the rest is speculating,” McLachlan told 3AW on Friday.

“As last year showed if we could not play there with a decent crowd we would review it, but that is not in our contemplation at the moment.

“I am sure we would have a sensible discussion with the Victorian government but it is just a hypothetical.”

Last year’s grand final was moved to the Gabba in Brisbane while Victoria was in lockdown and Gold Coast chairman Tony Cochrane believes the AFL should be already contemplating a move although the MCG is continuing to work on COVID-safe plans to present to the state government if and when this latest lockdown ends.

McLachlan indicated it was highly unlikely Victoria would be able to adopt a policy that required spectators to be vaccinated before they were allowed to attend big events as other sporting events such as the recent UEFA European Championships have done.

“We haven’t considered it yet because we are not there yet. We are clearly going to be strongly encouraging everyone to get vaccinated,” McLachlan said.

“The first thing we have to solve is supply and once we have got supply we encourage everyone to get vaccinated because we need it for our economy and our society to open up.”

He said an AFL working group was beginning to formulate an education program to inform players and staff about the importance of vaccination, with the league boss saying everyone in the industry would be strongly encouraged to be vaccinated as soon as possible.

In the US, the NFL has told clubs in newly released protocols that they will have been deemed to have forfeited matches in the upcoming season if they are forced to withdraw from games because an unvaccinated player on their roster is diagnosed with COVID, rather than having the game re-scheduled.

McLachlan confirmed the game’s costs are running at an extra $6 million per week in the past six weeks as clubs were relocated and transported interstate at short notice to keep the competition running.

He said although Sydney and the Giants were in hubs due to NSW’s lockdown, they wanted to avoid placing more teams in hubs because of the effect being away had on players and staff.

McLachlan was confident the season would be completed despite the COVID-19 outbreaks across the country.

“It’s a challenging period. It’s certainly more damaging if we are not playing,” McLachlan said.